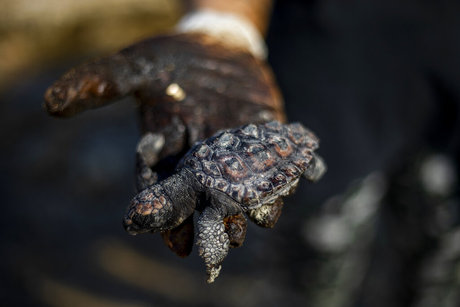 Israel on Wednesday accused Iran of "environmental terrorism" after a devastating oil spill off its Mediterranean coast it said was perpetrated by a Libyan-flagged ship that set sail from Iran.

Gamliel is a staunch ally of Prime Minister Benjamin Netanyahu, whose hardline stance against Iran is a key part of his re-election campaign ahead of polls later this month.

"Our long arm will reach anyone who harms our nature, our sea or our coasts," Gamliel warned.

The accusation comes after Israel accused Iran of a recent attack late last month on an Israeli-owned ship in the Gulf of Oman, further raising tensions between the arch foes.

Iran has denied any role in the explosion that hit the MV Helios Ray, leaving two holes in its side but causing no casualties.

The latest escalation between the arch-rivals also comes as the international community tries to salvage the troubled 2015 nuclear deal with Iran.

Israel has declared last month's oil spill as one of its worst ecological disasters in recent history.

Volunteers have teamed up with authorities to clean the beaches, while officials from the environmental protection ministry launched an investigation into the source of the spill.

Workers, including soldiers on loan from the army, are trying to scoop up the tar debris before warmer weather makes the sticky oil diffuse into the sand.

Oil also washed up on southern Lebanon, where thick tar balls hit a swathe of coastline which includes some of the country's best preserved beaches.

The area includes a maritime reserve which hosts a nesting site for turtles which usually appear later in the year.

As well as endangered loggerhead and green sea turtles, the beach provides shelter for the Arabian spiny mouse.

Mask-clad volunteers and members of the civil defense have been sifting blobs of tar out of sand on the beach of the Tyre Coast Nature Reserve.

Mouin Hamze, the head of Lebanon's National Council for Scientific Research, last week said he feared the oil pollution could continue washing up on Lebanese shores for up to three months.

The hezb should thank their Iranian allies for polluting beaches in the areas held by them. Idiot is what idiot does. God bless them

Thank you, Iran, for everything that you send our way. I knew that you would help us out. Oil is what we need.

It's a brotherly pollution, so hizb supporters in Lebanon are happy to swim in oil-filled beaches.