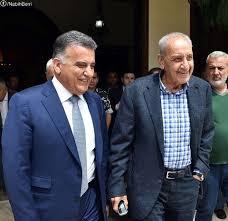 Parliament Speaker Nabih Berri is mulling the reactivation of his mediation regarding the new government, hoping he will be able this time to “resolve the obstacles that are still delaying the government’s formation,” highly informed political sources said.

The Speaker’s initiative calls for “the formation of an 18-minister government with no one-third-plus-one share to any camp and it would be left to him to find an exit to resolve the dispute over the allocation of the interior portfolio,” the sources added.

“This would hinge on Hizbullah’s communication with them and whether it is ready to practice its pressure instead of merely urging them to endorse the Speaker’s initiative,” the sources explained.

General Security chief Maj. Gen. Abbas Ibrahim meanwhile suspended his mediation after it ran into obstacles and after he knew of Berri’s intention to reactivate his own initiative, the sources said.

“Ibrahim took the decision on his own to prevent anyone from trying to depict his mediation as a competition with Berri,” the sources added.

So Ibrahim and Berri play "good cop/bad cop". The only problem is no one knows whos who as both of them are equally bad..