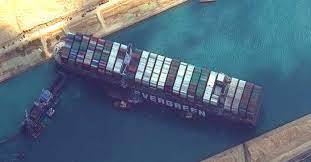 Within days, it causes a traffic jam of over 400 cargo ships at the two ends of the crucial global shipping lane.

On Monday, nearly a week later, a flotilla of tug boats helped turn the stern 80 percent in the right direction, canal authorities said, raising hopes it will soon be freed.

Here is what we know so far:

The 400-metre (1,300-foot) long, 200,000-tonne MV Ever Given, categorized as a "megaship", veered off course in the canal when a gale-force duststorm hit Egypt's Sinai Desert and much of the Middle East.

The 59-meter (195-foot) wide Panama-flagged vessel became stuck at about 0540 GMT near the southern end of the canal and diagonally blocked the man-made waterway between the Mediterranean and the Red Sea.

The ship's operator, Evergreen Marine Corp of Taiwan, said the vessel -- en route from Yantian, China to the Dutch port of Rotterdam -- "ran aground after a suspected gust of wind hit it".

But the head of the Suez Canal Authority (SCA), Osama Rabie, told  reporters Saturday the accident may have been due to "technical or human errors", rather than the 40-knot winds.

The 25 crew were unhurt, the hull and cargo undamaged, and there was no oil leak, said Singapore-based Bernhard Schulte Shipmanagement (BSM), which provides management services for the megaship.

The vessel blocked the shipping artery through which more than 10 percent of global maritime trade passes, much of it oil and grain.

The Suez Canal, opened in 1869 and widened since, is a crucial shortcut between Asia and Europe that saves ships from having to navigate around Africa.

As a result of the accident, more than 400 vessels were treading water at either end of the canal by Monday.

"It is likely that the congestion... will take several days or weeks to sort out as it will have a knock-on effect on other convoys."

Lloyd's List, a shipping data and news company, said firms were being forced to consider "taking the far longer route around the Cape of Good Hope to get to Europe or the east coast of North America", a diversion that can take an additional 12 days.

Shipping expert Rose George told AFP on Friday the blockage was certain to cause price increases for consumers around the world.

In signs of the knock-on effects, Syrian authorities said Saturday they had been forced to ration already scarce fuel supplies, while Romania's animal health agency said 11 ships carrying livestock out of the country were affected by the traffic suspension.

Egypt is losing some $12-14 million in revenue from the canal for each day it is closed, Rabie said, while Lloyd's List said the blockage is holding up an estimated $9.6 billion worth of cargo each day between Asia and Europe.

Early Monday, a flotilla of tugs succeeded in shifting the front and back of the ship, to reorientate it "80 percent in the right direction," Rabie said.

The SCA chief called the start of the refloating process a "success", but an official from Ever Given's owners Shoei Kisen cautioned that while the ship "has turned", so far it was "not afloat".

Further efforts to refloat the vessel were due to get underway late morning local time on Monday.

Salvage crews have been working around the clock.

They had focused on efforts to remove sand around the ship, with 27,000 cubic meters (over 950,000 cubic feet) cleared at a depth of 18 meters (59 feet), SCA spokesman George Safwat said Sunday.

Once the 200,000-tonne ship is fully afloat, it will take around three and a half days to clear the traffic jam of ships, Rabie said Monday, praising rescue efforts with tugs that had succeeded in shifting the stern of the ship.