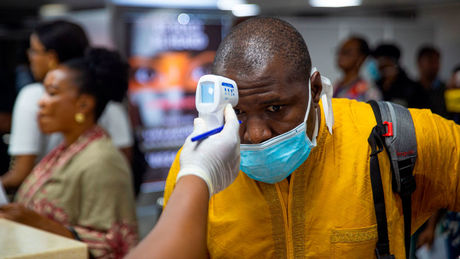 Many European Union nations are reeling from dramatic spikes in cases that have forced the reimposition of unpopular restrictions, including in Belgium where police used water cannon to disperse thousands who had gathered in violation of Covid-19 rules.

Spikes in South America have reached alarming levels, fuelled by a more contagious variant first detected in Brazil, as Chile closed all borders, Bolivia sealed its frontier with Brazil, and Peru went into a lockdown over Easter.

"We are in a very critical moment of the pandemic," Chilean government spokesman Jaime Bellolio said Thursday, as the nation announced a border closure starting Monday.

Intensive care units in Chile are close to capacity, and authorities are trying to speed up vaccinations in a bid to stem the spread of Covid-19.

Neighboring Peru started a four-day national lockdown for the Easter weekend as it recorded its highest number of new cases since the start of the pandemic.

The country has a ban in place on all flights from Brazil, Britain and South Africa until April 15 to try and keep out the variants first detected there.

Ecuador's president also announced fresh curbs against an outbreak he described as a "public calamity".

Brazil is the epicentre of the coronavirus wave sweeping South America, reporting a staggering 66,500 Covid-19 deaths in March alone.

At a field hospital in the suburbs of Sao Paulo, one doctor said she was alarmed at the spread of the virus -- and frustrated to see many of her compatriots ignore face masks, shun social distancing guidelines and even flood to underground parties.

"I see no difference in people's behaviour. People don't seem to understand the magnitude of this," said 53-year-old surgeon Marise Gomes.

Europe is also struggling to stop dramatic surges in infections, as the World Health Organization warned Thursday that its sluggish vaccination drive was prolonging a pandemic that has already claimed more than 2.8 million lives worldwide.

"Vaccines present our best way out of this pandemic... however, the rollout of these vaccines is unacceptably slow," said WHO director for Europe Hans Kluge.

"We must speed up the process by ramping up manufacturing, reducing barriers to administering vaccines, and using every single vial we have in stock."

Only 10 percent of Europe's total population has received one vaccine dose, and four percent have received two, according to the WHO.

The EU's stalling roll-out stands in stark contrast with China, where the virus first originated, where biopharmaceutical firm Sinovac said Friday a third production line for its Covid-19 vaccine has been put into use, doubling its annual capacity of the jabs to two billion doses.

Amid surging cases, authorities in many EU countries including France, Italy and Belgium have been forced to reimpose restrictions, but after more than a year under such measures, populations are becoming increasingly weary.

Frustrations boiled over in Belgium on Thursday, where police used water cannon to disperse a crowd of 2,000 people that had come to a Brussels park despite strict coronavirus restrictions against such gatherings.

AFP journalists at the scene saw projectiles thrown at police in riot gear in the Bois de la Cambre park, venue of a fake concert announced on social media as an April Fool's Day prank.

There was more concern about the AstraZeneca shot on Friday, as Australian health officials said they were investigating a possible link between the vaccine and a case of blood clotting in a man who received it.

Several countries, including some EU nations, have temporarily suspended the AstraZeneca shot over concerns about side effects in recent weeks, but have so far found no evidence linking it with blood clots.

The WHO, EU regulators and AstraZeneca say the jab is safe.

War-torn Syria's first shipment of the AstraZeneca vaccine under the global Covax scheme has been delayed until at least May, as the country's intensive care facilities are overwhelmed by Covid-19 cases.

"There are many patients who need intensive care," said Asma Sbayni, a doctor at the Mouwasat Hospital in Damascus.

"Unfortunately, there are many critical cases who die in front of us... We can't do anything for them."