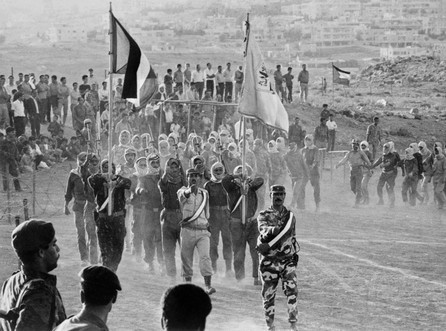 A Jordanian top former royal aide was among several suspects arrested Saturday, as the army warned a half-brother of King Abdullah II against damaging the country's security.

Here is a timeline of key events in the desert kingdom since independence in 1946.

On May 25, 1946, the Arab state of Transjordan declares its independence from Britain, with King Abdullah as its sovereign.

The kingdom takes control of the West Bank and East Jerusalem, formally annexing both in 1950.

After King Abdullah is assassinated and King Talal declared mentally unfit after a year on the throne, Abdullah's 17-year-old grandson Hussein is proclaimed king in August 1952.

He formally takes the throne the following year, starting a reign that will span 46 years.

In the Six-Day War of June 1967, Jordan loses the West Bank and East Jerusalem to Israel.

Some 200,000 Palestinians flee to Jordan, where more than half the country's population today is of Palestinian descent.

Elections are held in 1993, with independents supportive of Hussein prevailing. The prime minister and cabinet are chosen by the king.

A year later, the United States oversees the signing of a peace treaty between Israel and Jordan.

King Hussein dies of cancer on February 7, 1999, leaving the throne to his son Abdullah II.

The early years of Abdullah's reign are marked by the war in neighboring Iraq, which sends a wave of Iraqi refugees into the kingdom.

In January 2011, in the wake of the Arab Spring uprisings, mainly Islamist opposition activists begin regular protests to demand reforms.

Later that year, thousands protest against an increase in energy prices, with some demanding the removal of the king -- a first.

The war in neighboring Syria sends hundreds of thousands of refugees fleeing to Jordan.

In September 2014, Jordan joins a Washington-led coalition against the Islamic State group in conflict-hit Syria.

Amman hangs two jihadists and steps up its support for the anti-IS coalition to Iraq.

In June 2016, an IS suicide bomber kills seven Jordanian soldiers near the Syrian border.

The coronavirus pandemic has dealt another blow to Jordan, with over 625,000 cases and at least 7,130 deaths according to Ministry of Health figures on Saturday.

In March, at least seven Covid-19 patients died when a hospital in Salt, northwest of Amman, ran out of oxygen. The tragedy triggered protests and forced the health minister to resign.