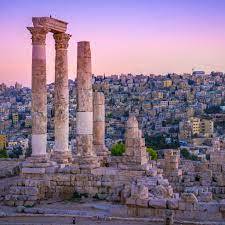 Jordan, a former British protectorate, is seen as a key Western ally and anchor of stability in the Middle East.

With few natural resources and now hosting large numbers of Syrian refugees, it is heavily dependent on international loans and foreign aid.

Here are some key facts about the country:

Jordan's royal family, the Hashemite dynasty, traditionally ruled over Islam's holy city of Mecca and shares a common ancestor with the Prophet Mohammed.

Though the fall of the Ottoman empire allowed the Hashemites to temporarily rule over Syria, Iraq, the Hejaz region of Saudi Arabia and the West Bank, today they retain power only in the kingdom of Jordan.

Despite losing the West Bank and East Jerusalem to Israel in the Six Day War of 1967, the kingdom has retained stewardship over East Jerusalem's Islamic holy sites.

A little over half of Jordan's population of about 10 million is of Palestinian descent. It is also home to some 2.2 million Palestinian refugees.

The kingdom is allied with the United States and was the second country after Egypt to sign a peace treaty with Israel, in 1994.

It has historically championed a two-state solution to the Israeli-Palestinian conflict.

Since declaring independence from Britain in 1946, Jordan has had four monarchs. King Hussein was forced to make democratic reforms in the late 1980s after street protests.

Elections were first held in 1989 but parliament's power remains limited, with the king, currently Abdullah II, choosing the prime minister and the 65-member senate.

Jordan played a key role in the U.S.-led coalition against the Islamic State group in Syria and Iraq, carrying out strikes and making military bases available.

The country has also been the target of several IS attacks.

Home to some of the world's finest archaeological sites, including the ancient city of Petra, tourism normally accounts for 14 percent of Jordan's GDP.

But the industry has been brought to a standstill by the Covid-19 pandemic.

In March 2020, the International Monetary Fund approved $1.3 billion in aid, subsequently adding several hundred million in emergency funds to soften the impact of the Covid-19 crisis.

Only slightly larger than Portugal, Jordan has few natural resources and only one port, Aqaba, on the Red Sea.

War in the region has been further taxing resources. Jordan hosts some 650,000 Syrian refugees, adding to 700,000 Syrians authorities say were already living in the country before war broke out.

It had already hosted refugees fleeing conflict in Iraq.

Jordan estimates the cost of hosting Syrian refugees at around $10 billion and regularly complains of a lack of international support.

The kingdom has seen four kings and six cosmopolitan queen consorts -- in addition to one princess consort -- four of them married to Hussein.

The present queen, Rania, has used her celebrity to continue the royal tradition of supporting children's causes, boasting over 10 million Twitter followers and a YouTube channel.

The Azraq wetlands in the east of the country were once home to a veritable ark of animals, from rhinos and hippos to Asian elephants, cheetahs, ostriches and lions.

Lions were hunted to extinction in the 13th century but Jordan's cheetahs survived until the 20th century. The last of its water buffalos died in the 1990s, as springs were diverted to feed the capital Amman.