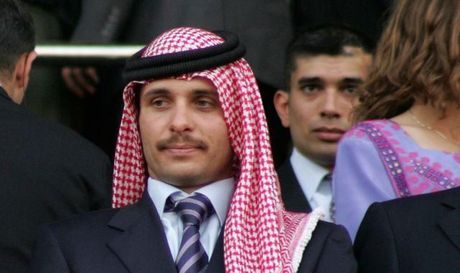 Jordan's Prince Hamzah, who says he is under house arrest in a dispute with the government, was once the crown prince but lost that title to the son of his half-brother King Abdullah II.

British and U.S.-educated Hamzah bin Hussein, 41, is the youngest son of the late King Hussein and his fourth and last wife, the American-born Queen Noor.

In a video released by the BBC on Saturday, Hamzah says he has been confined to his home after several senior figures were detained in a security sweep amid reports of a coup plot.

He denied being part of "any conspiracy or nefarious organization" but charged that the Hashemite kingdom had "become stymied in corruption, in nepotism, and in misrule."

Joint Chiefs of Staff head Major General Yousef Huneiti denied the prince had been detained but said he was "asked to stop some activities that could be used to shake the stability and security of Jordan."

A Jordanian analyst who did not want to be named for security reasons said Hamzah had recently "stepped up his criticism of what he described as corruption within the government in front of his circle of friends."

According to the same source, "there is certainly resentment on his part, because he has never digested losing his title of crown prince."

Hamzah was born on March 29, 1980 to Hussein's fourth and last wife, Queen Noor.

Queen Noor, born Lisa Halaby, was only 24 when she arrived in Jordan in 1976.

She was married to Hussein within two years and widowed after two decades.

On Sunday, in the wake of the security sweep, she tweeted that she was "praying that truth and justice will prevail for all the innocent victims of this wicked slander. God bless and keep them safe."

Prince Hamzah attended school in London before studying at the British Royal Military Academy Sandhurst, where he excelled, similarly to Abdullah, who is 18 years his senior.

He embraced a military career and served in the former Yugoslavia in a Jordanian-Emirati unit before studying at Harvard.

An accomplished sportsman, he also became a skilled pilot, like his father.

Hamzah has been popular among Jordanians in part because he looks and sounds like his late father.

At the time of the king's premature death from illness in February 1999, Hamzah was very young and Abdullah, the eldest son of Princess Muna, Hussein's second wife, acceded the throne.

But Hamzah didn't hold that position long. Just five years later, in 2004, Abdullah stripped Hamzah of the succession in favor of his own son, Hussein.

In a letter to his half-brother at the time, the king said that the symbolic position of heir "has restricted your freedom and prevented us from entrusting you with certain responsibilities that you are fully qualified to assume".

But Hamzah did not appear to see his disinheritance in the same way.

"The chance to become king escaped him twice: when his father died prematurely -- he was too young -- and when his brother withdrew his title" of heir, the Jordanian analyst said.

On July 2, 2009, Abdullah confirmed his eldest son Hussein as his successor.

Hamzah, a father of five daughters and a son, distanced himself gradually from the top circles of power.

Nevertheless, on Saturday, "his royal blood may have saved him from prison", the analyst said.

"Because in the royal family, you don't imprison a prince, you sideline him."