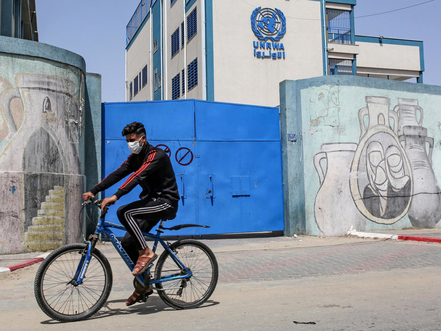 "UNRWA could not be more pleased that once again we will partner with the United States to provide critical assistance to some of the most vulnerable refugees across the Middle East," the agency's commissioner general, Philippe Lazzarini, said in a statement.

"The U.S. contribution comes at a critical moment, as we continue to adjust to the challenges the Covid-19 pandemic presents."

The Biden administration's decision to restore U.S. aid to the Palestinians to the tune of $235 million marked a sharp break with the policy of his staunchly pro-Israel predecessor Donald Trump who severed all financial assistance.

Its decision to earmark $150 million of that for UNRWA drew particular anger from Israel, which argues that the agency serves to perpetuate the idea of a Palestinian refugee problem in a way that undermines the Jewish state.

"We believe that this U.N. agency for so-called 'refugees' should not exist in its current format," said the Israeli ambassador to the United States, Gilad Erdan.

"I have expressed my disappointment and objection to the decision to renew UNRWA's funding without first ensuring that certain reforms, including stopping the incitement and removing anti-Semitic content from its educational curriculum, are carried out," Erdan said.

Asked about the Israeli criticism, State Department spokesman Ned Price said that the United States took oversight of UNRWA "extraordinarily seriously" and that it would now have "a seat at the table."

The UNRWA chief said renewed U.S. support would help the agency to "fulfil our mandate to educate and provide primary health care to millions of refugees every day."

"There is no other institution that does what UNRWA does, and we are committed to protecting the safety, health and future of the millions of refugees we serve," Lazzarini said.

Trump's decision to sever all aid had left an enormous hole in UNRWA's finances.

Around 40 countries initially helped fill the gap, but contributions have since diminished and the pandemic has also taken a financial toll on donor countries.

The new U.S. aid pledge is still well below the $355 million contributed to UNRWA in 2016 by the United States, then its largest contributor.

The State Department spokesman did not rule out further U.S. contributions but said the United States was encouraging other donors to do more.

The new funding is in addition to $15 million earlier announced by the United States in Covid assistance to the Palestinians amid criticism that Israel, a leader in vaccinating its own people, has not taken similar initiatives in territories under its occupation.