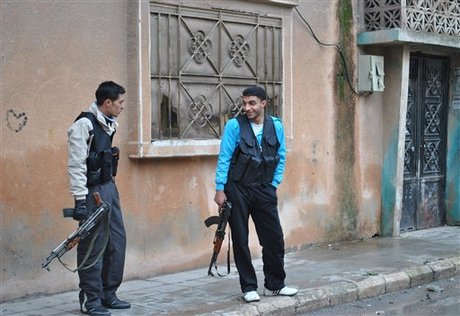 The rebel Free Syrian Army claimed on Friday to have captured five Iranian military officers in the restive city of Homs and urged Tehran to "immediately" withdraw any additional troops it may have in Syria.

In a statement, the FSA said the Iranians captured "were working under the orders of the intelligence services of the Syrian air force" and had no valid papers to reside or work in Syria.

It did not specify when the officers were arrested and FSA officials could not be immediately reached for comment.

The statement urged Iran's supreme leader Ayatollah Ali Khamenei to admit that members of the Iranian Revolutionary Guard Corps, or Pasdaran, were in Syria to assist the regime of Bashar Assad in its bid to crush a 10-month popular revolt.

It added that two Iranian civilians also captured by the FSA would be released as they were employed at a power plant in the central region of Homs, which has become a flashpoint of the revolt against Assad.

The FSA, which claims to have 40,000 soldiers who have deserted the regular army, posted a video along with its statement that showed several men carrying what it said were Iranian passports.

Iran is Syria's closest ally in the region and has stood behind the regime in Damascus despite international condemnation against the fierce crackdown that has left more than 5,000 people dead.

On Thursday the Iranian foreign ministry said 11 Iranian citizens on a pilgrimage to Syria had been kidnapped in the central part of the country.

"According to our information, 11 Iranian pilgrims travelling by road to Damascus were kidnapped by an unknown group," said ministry spokesman Ramin Mehmanparast, quoted by the state news agency IRNA.

"We call on the Syrian government to use all means ... to release the Iranian nationals," he said.

In a similar incident in late December, seven Iranian engineers were kidnapped in the Homs region of central Syria, a hub of deadly unrest which has swept the Arab state since last March.

Come on, those are nothing but Iranian pilgrims yeah, pilgrims on a pilgrimage, yeah, visiting the restive city of Homs, yeah right, in fact they were from the Iranian pilgrims anonymous, yeah, one of the five is even the president of the organization, yeah, another one is just a merchant looking for a new source of silk of his necktie shop in Qom, yeah, he's even by appointment to his majesty the Ayatollah and president Ahmadinejad official supplier of neckties, yeah that's right take that Pierre Cardin, that's the ticket, yeah, you betcha.

Let them capture some Hezz too.

Pilgrims...hmmm... why not rug merchants, or caviar dealers while you're at it Mahmoud!

These Iranian officers were strolling the streets of the Sham Elysees when they were captured. They were carrying maps of the neighborhood and looking for recruits! But they could not fool the Syrian liberators! CNN showed them yesterday as I was watching. CNN also said that shab, Gabby, peace, thepatriot, aragon and allouchi predicted 11 months ago that the Syrian regime was about to fall in three months. We are still waiting for updates on the situation.

@Zomba
I "predicted" nothing! Cut off the lies! The major oracle in this case is Michel Aoun ya zaki!