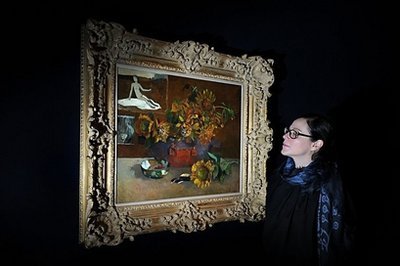 A historic painting by French post-Impressionist artist Paul Gauguin failed to sell at a London auction Wednesday despite being displayed for the first time in 15 years.

"Nature morte a 'L'Esperance'" was expected to sell for around 10 million pounds (16.1 million dollars, 11.7 million Euros) when it appeared at Christie's auction house, but failed to meet its reserve price.

The 1901 painting, which depicts sunflowers in tribute to friend Vincent van Gogh, was displayed at the 1906 Salon d'Automne exhibition that strongly influenced modern pioneers Henri Matisse and Pablo Picasso.

The most expensive item of Wednesday's auction was Pierre Bonnard's "Terrasse a Vernon," which sold for 7.2 million pounds. The "colorist" painting portrays the view from the French painter's Norman house.

Also Wednesday, Christie's held a sale of "Art of the Surreal," which realized a further 30 million pounds.

The highlight of the auction was the four million pounds paid for Salvador Dali's "Etude pour 'Le miel est plus doux que le sang'," one of the Spanish surrealist's earliest articulations of his signature dream-like imagery.

This represented the most ever paid at auction for one of the eccentric artist's pieces of work.