NASA Spacecraft to Have Valentine Rendezvous with Comet 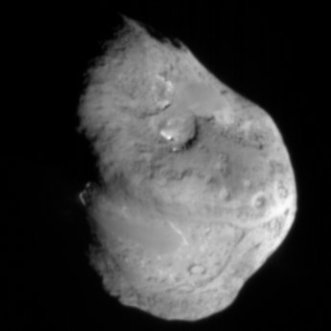 After a long-distance courtship, a NASA spacecraft is set to meet up with its celestial sweetheart — a comet half the size of Manhattan that had an encounter with another spacecraft not long ago.

The rendezvous between Stardust and comet Tempel 1 occurs on Valentine's Day some 210 million miles from Earth. Hurtling at 24,000 mph, Stardust will fly within 125 miles of the potato-shaped comet, snapping pictures along the way.

If successful, it will be the first time that scientists will have before-and-after images of Tempel 1, allowing them to observe any changes on the uneven surface.

In 2005, Tempel 1 received a not-so-loving visit from another NASA probe named Deep Impact, which fired a copper bullet into the comet on the Fourth of July that sparked cosmic fireworks and excavated a crater. The high-speed crash hurled out so much dust and debris that Deep Impact failed to see the man-made hole even as it beamed back dazzling pictures of other surface features.

Scientists hope to get a second chance with Stardust, which is expected to pass near the 2005 bull's-eye.

"I'm going to be sleepless on Valentine's Day and sending a lot of love to this comet," quipped mission co-investigator Pete Schultz of Brown University.

Comets, irregular bodies of ice and dust that orbit the sun, are frozen leftover building blocks of the solar system, which formed when a huge cloud of gas and dust collapsed about 4.5 billion years ago. Studying comets could yield clues to the birth of the solar system.

Tempel 1 is not the first comet that Stardust will get cozy with. In 2004, it swooped past comet Wild 2 and captured a bounty of interstellar and comet dust. The probe jettisoned samples to Earth in a capsule that parachuted to the Utah desert — the first time that a spacecraft had fetched particles from a comet back to Earth.

Stardust has traveled 3 1/2 billion miles since launching from Cape Canaveral, Fla., in 1999. Because it had ample fuel after visiting Wild 2, NASA decided to recycle it for another job. For the past four years, Stardust had its sight on Tempel 1, adjusting its path several times and even using gravity assist from Earth to put it on target for a Valentine's date.

"It's got some mileage on it, but it's still working well," said project manager Tim Larson of the NASA Jet Propulsion Laboratory, which manages the encore mission.

Unlike the trip to Wild 2, which cost $300 million, Tempel 1 at $29 million will be a cheap date by space mission standards.

Stardust will navigate autonomously during closest approach, which is expected to occur at 8:37 p.m. PST Monday. Scientists should know within 20 minutes if the flyby was successful.

During the encounter, Stardust will take dozens of high-resolution images of Tempel 1's nucleus and coma, a fuzzy halo of gas and dust. It will also use its two dust detectors to measure the size and makeup of dust grains. The spacecraft is equipped with a protective shield to deflect potentially dangerous particles as it zips past.

Principal investigator Joe Veverka of Cornell University said he looks forward most to finally seeing the impact crater created by Deep Impact, but would be just as satisfied with seeing new surface features. One of the reasons scientists can't guarantee that Stardust will image the crater is because they've had to guess which side of the comet the craft will see as it approaches.

Stardust's antenna won't be pointed at Earth during the mission so the public will not be able to see the encounter in real time. After passing Tempel 1, Stardust will turn toward Earth and start relaying data — a process that will take 12 hours to complete.

Unfortunately, Stardust won't have enough fuel to flirt with another comet after this.