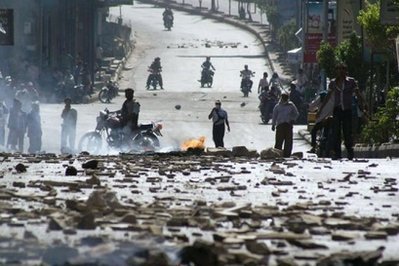 Dozens of people were hurt in clashes in southeast Yemen between rival demonstrators supporting and opposing Tuesday's presidential election, witnesses said on Friday.

They said the trouble began late on Thursday when activists of the pro-secession Southern Movement, which opposes the election, threw stones and petrol bombs at a sit-in of pro-election activists in Mukalla, the capital of Hadramawt province.

The activists have been campaigning for the election, which will see Vice President Abdrabuh Mansour Hadi stand as the sole candidate to replace veteran strongman Ali Abdullah Saleh, who is standing down under a Gulf-brokered deal.

Tuesday's election follows a year of protests against Saleh's rule, deadly unrest that erupted last January as the so-called Arab Spring swept through Tunisia and Egypt.

Saleh's departure has been the main demand of the anti-regime demonstrators in Yemen.

"Armed men of the Southern Movement" attacked their sit-in, the activists said in a statement, "injuring 60 youths of the revolution, some seriously, and setting fire to four tents" in Mukalla's Change Place, focus of the protests.

Thousands of people have burned their electoral cards in recent weeks at the urging of the Southern Movement.