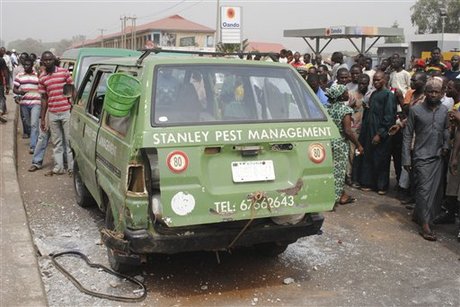 The attack is the latest in a country grappling with what have become almost daily assaults, most of them blamed on the Islamist sect Boko Haram.

Church workers said a car forced its way through the gate during an early morning service.

"We were in the church during the time of worship and a suicide bomber forced himself into through the gate, into the church and the bomb exploded," John Haruna, the reverend of the Church of Christ in Nigeria (COCIN), told AFP.

Another church member who is also an activist with the Christian human rights organization Stefanos Foundation gave a similar account.

"It was suicide bomber, he drove his car into the church, approaching the pulpit and it exploded. Three members of the church died and 10 are injured," Mark Lipdo, said.

He said pieces of human flesh littered the church premises.

Boko Haram has been blamed for a wave of increasingly bloody gun and bomb attacks in several parts of Africa's most populous country in recent months, mostly in the Muslim-dominated north.

Incidents of attacks are also growing in the central region, the so-called middle belt which divides the predominantly Muslim north and the mainly Christian south.

Last Sunday, several people were wounded in an explosion near a church outside the capital, Abujba.

Boko Haram has targeted Christians on several previous occasions, notably with a series of coordinated blasts on Christmas Day.

This is the culture of Death Hasouna talks about.

The Muslim world should stand as one, rebuking this cowardly act. Christians must pray for the repentance of these misguided people who call themselves Boko Haram. Most of all the victims must forgive this act, so the senseless violence stops now.