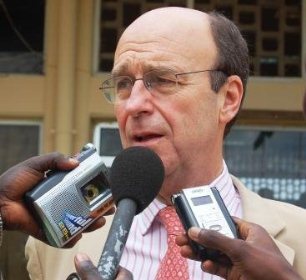 United Nations Special Coordinator for Lebanon Derek Plumbly ruled out any intention by the U.N. to set refugee camps for Syrians who have fled to Lebanese border towns or to set up humanitarian corridors through Lebanon.

Plumbly told reporters on Tuesday that he fears the escalating situation in Syria might have repercussions on Lebanon, but the officials he met with since his appointment stressed their keenness to safeguard Lebanon and disassociate it from the developments in the neighboring country.

He noted that the visit of U.N. Under-Secretary-General for Humanitarian Affairs and Emergency Relief Coordinator Valerie Amos to Lebanon was to coordinate, on international levels, the issue of the Syrian refugees.

The U.N. official revealed that the numbers of Syrian refugees in Lebanon have reached 6,916, a number that is increasing on daily basis.

Earlier this month, the Lebanese army reinforced its presence in the northern region of Wadi Khaled, which borders Syria and is close to the flashpoint province of Homs.

Syrians have sought refuge in Lebanon, most of them in Wadi Khaled, since the outbreak nearly a year ago of an unprecedented revolt against the regime of President Bashar Assad.

The Syrian army in November laced the Lebanese border with landmines in a bid to curb arms smuggling and to hamper army defectors and refugees from fleeing.

Plumbly said that his mission in Lebanon is to guarantee the implementation of U.N. Security Council resolution 1701 as Lebanon and Israel are demanded to exert more efforts to implement peace and halt any violation along the border.

His mission is also to coordinate the U.N.’s efforts in Lebanon through managing the work of its organizations in the country.

According to Plumbly around 14,000 people work at the U.N. organizations in Lebanon, with 11,000 of them linked the United Nations Interim Force in Lebanon.

The U.N., according to the diplomat, makes allocations of $800 million per year for Lebanon.

Plumbly expected that the U.N. "strategy" review of its peacekeeping force, which has been hit by several attacks in recent months, would be referred to the U.N. Security Council in March.

UNIFIL soldiers have been the target of three attacks in the past year that have prompted fears they could be linked to the deadly unrest in neighboring Syria.

The force was deployed in 1978 to maintain stability at the border between Lebanon and Israel. It was expanded in 2006 following a devastating war between Hizbullah and the Jewish state.

Concerning the Special Tribunal for Lebanon probing the assassination of ex-Prime Minister Rafik Hariri, Plumbly expressed “relief” over the cooperation between the cabinet and the court.

The STL has issued arrest warrants against four Hizbullah suspects. But the authorities in Lebanon have failed so far to arrest them.