One Killed, Seven Wounded in Building Collapse in Tabarja 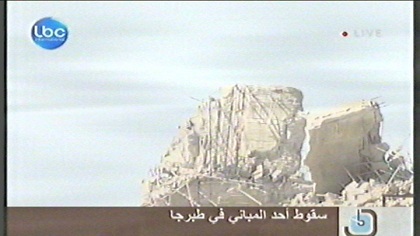 One person was killed and seven others wounded in a building collapse in the town of Tabraja Friday night, reported Voice of Lebanon radio on Saturday.

The victim has been identified as an Indian laborer.

The 13-storey building is occupied by foreign laborers.

The building, which was never complete, is located near the Tabarja Beach resort.

The resort administration issued a statement on Saturday announcing that the collapsed building is not part of its complex.

LBC reported that eight people have been rescued from under the rubble, adding that the search for another Indian national is underway.

The wounded include, two Syrians, two Egyptians, and a Sri Lankan,who have been transported to nearby hospitals.

They are not in critical condition.

He later told VDL that the building has been illegally constructed.

He revealed that its construction began before the 1970s, but the mission was abandoned due to the eruption of the civil war.

He attributed the collapse to negligence seeing as its seafront location would have subjected the building to the harmful sea elements that would have eroded its foundations.

The owners of the building are responsible for the collapse, but the matter will be handled by the concerned judicial authorities, he said.

There are fears of the collapse of nearby buildings as well, added the minister.

On the collapse itself, Charbel explained: “One of the laborers felt the building shake and urged the residents to evacuate it, therefore avoiding disaster.”

Security forces have since cordoned off the building, reported MTV.

It added that the concerned authorities may issue a decision to tear down the building.

VDL said that only three floors of the building were destroyed.

Experts told the radio that the building, which has been constructed but never complete years ago, should have been torn down because it did not meet safety regulations.

On January 15, 27 people were killed and 12 wounded when a building collapsed in the Fassouh district in Beirut’s Ashrafiyeh neighborhood.

Charbel had said that the building’s old age was among the factors that contributed to its collapse.

The incident had raised fears of the occurrence of similar ones given the abundance of old buildings in the country and people’s ignorance of proper construction safety rules.

Despite the outcry over the Fassouh building collapse, no official authority has been established in order to monitor similar cases to prevent the repeat of the disaster.

All buildings that were built before 1990 in lebanon should be inspected.