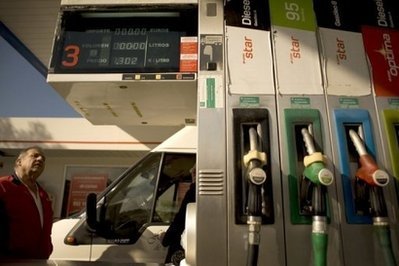 Oil prices struck $108 on Tuesday, as Libyan production was hit by violent protests and concerns grew over spreading unrest in the strategic crude-producing Middle East and North Africa region.

The contract later stood at $94.08, up $7.88 from Friday. U.S. financial markets were shut on Monday for a public holiday.

"The unrest in Libya is particularly worrying for a number of reasons, including the regime's apparent willingness to use extreme violence against the opposition," said Capital Economics analyst Julian Jessop.

"On top of this, Libya is the first major oil exporter to be engulfed by the crisis and the first to see any significant disruption to oil production.

"Much of Libya's oil industry is offshore and should be relatively easy for government forces to secure.

"But one major oilfield has already been shut down by industrial action in support of the protests and others have been threatened."

The U.N.'s human rights chief called Tuesday for an international probe into violence used by Libyan authorities to suppress protests, saying that such "unconscionable" violations must end immediately.

However, Libyan television dismissed as "lies" allegations that security forces are massacring protesters, after embattled leader Moamer Gadhafi spoke publicly for the first time since the revolt began.

Prices are reacting to unrest sweeping the Middle East and not to fundamentals of supply and demand, the United Arab Emirates energy minister said in Riyadh.

"The market is reacting to violence in the Middle East... and not to fundamentals," Mohammad bin Dhaen al-Hamli told reporters on the sidelines of a producer-consumer meeting in the Saudi capital on Tuesday.

"We (OPEC) are watching the situation and ready to act when necessary," said Hamli, who declined to be drawn on when it will be time to intervene by the Organization of Petroleum Exporting Countries.

Hamli said OPEC was concerned about the developments in Libya "because it is a member of OPEC and a major oil producer."

Witnesses in the Libyan capital Tripoli had reported "massacres" in certain neighborhoods after the state channel had announced security forces were assaulting "dens of terrorists."

"As events in Libya have turned more violent, the impact on the country's output is beginning to be affected, as producers there begin pulling out staff due to safety concerns," said Westhouse Securities analyst David Hart.

"Given that Libya is a major oil producer and exporter, this is having a more significant impact on oil prices than previous unrest."

German group Wintershall, a unit of chemical giant BASF began on Monday to pull 130 of its staff and their families out of Libya, it told Dow Jones Newswires, without giving details on the evacuees' nationalities.

Wintershall operates eight oil fields in the country and employs a total of 400 people there, most of whom are Libyans.