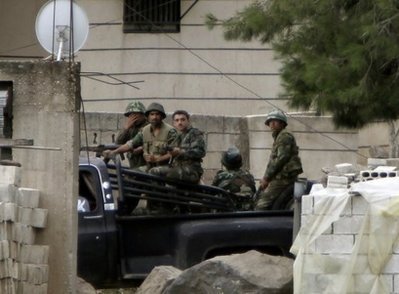 Syrian security forces mounted operations on Sunday in the northern province of Aleppo, northwestern Idlib, the east's Deir Ezzor region, Daraa in the south and al-Raqqa in the northeast, killing at least 37 people across the country, activists said.

Five rebels from the Free Syrian Army and three children were among the 37 casualties, the Local Coordination Committees, the main activist group spurring protests on the ground, said.

Twelve people were killed in Idlib, four in Daraa, seven in the central province of Homs, six in the restive countryside around Damascus, two in the Qalamoun region, two in Aleppo province and four in Deir al-Zour, the LCC said.

In the Aleppo region, Atareb town was shelled for the 33rd straight day, said Mohammed al-Halabi, contacted by Agence France Presse from the Lebanese capital on Skype.

Raids by security forces killed three civilians, including a 14-year-old boy, in the mountainous Jabal al-Zawiya region of Idlib, said the Syrian Observatory for Human Rights, a Britain-based monitoring group.

The Observatory said four soldiers were killed in clashes with rebels in the same region bordering Turkey, while security forces killed a civilian in Daraa, where deserters blew up a bridge near Khorbet al-Ghazaleh to cut a supply route.

It also reported that security forces beat up and detained opposition figure Mohammed Sayyed Rassas, a National Coordination Committee for Democratic Change leader, which is normally tolerated, and several youths at a Damascus protest.

On Saturday, two "terrorists" were killed as a booby-trapped car they were driving blew up in a Palestinian refugee camp in a suburb of Damascus, Syria's state news agency SANA reported.

It said the blast in Yarmouk camp on Saturday, the same day as authorities said 27 people were killed in two suspected car bombings in central Damascus, also damaged parked cars and shattered windows of nearby buildings.

Yarmouk is the largest Palestinian camp in Syria, which hosts around half a million registered Palestinian refugees.

the photographer died after the above picture was taken

the photographer died after the above picture was taken

It is not called a Syrian Army, it's called a terrorist militia and shabiha, look at the truck they are riding between the houses in the small allies. I am not surprised the photographer was shot after the picture was taken.

the filthy zionist scum and trash is hallucinating about the death of photographer and also, that zionist entity supports assad.