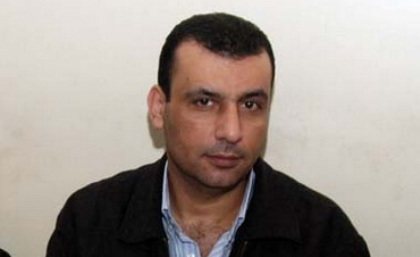 A bomb was found near the home of Palestinian Armed Struggle chief Mahmoud Issa, who goes by the nom de guerre of al-Lino, at the refugee camp of Ain el-Hilweh, the National News Agency reported Wednesday.

NNA said that TNT explosives attached to three grenades were found at 6:30 am inside a bucket of paint near the house of al-Lino, whose group is dominated by Fatah.

MTV said the bomb was estimated to contain 30 kilograms of TNT.

Members of the Palestinian Armed Struggle immediately cordoned off the area and an explosives expert defused the bomb that was also attached to tapes, detonators and two mobile phones, NNA said.

The news agency added that one of the phones had a message on its screen but its details were not immediately available.

The PAS launched an investigation into the incident.

In a press conference he held at the camp, al-Lino hinted that the planned explosion was linked to ongoing efforts by Palestinian factions to hand over the head of a Takfiri network to the Lebanese army.

Earlier this month, authorities arrested a ring led by the leader of Abdullah Azzam Brigades, Abu Mohammed Toufiq Taha, for planning attacks on the Lebanese army. But the man is reportedly on the run in Ain el-Hilweh.

Later Wednesday, one of al-Lino’s bodyguards identified as Abd Suleiman al-Mutlaq was injured in his thigh after an argument with the residents of the area where the bomb was found turned into a gunfight.

Al-Lino’s bodyguard Amer Fustoq was killed inside the camp in December 2011.

Disarm ALL militarized factions on Lebanese soil... Our glorious army can handle both Israel and its ally, Syria. The Palestinians are guests, they don't need weapons in our country.

Ausolutelty... Racist and intolerant. If you could just see how they treat maids (literally slaves) around here....

Disarm everyone. But ya kanaan they are not Lebanese? The camps are not a part of lebanon. And you are talking about tge people that started tge civil war in lebanon. We are racist people, maybe. But we are overwhelmed by the millions of non Lebanese people forcefully residing on our soil. This isn't about citizenship. This is about armed gangs operating with no respect for our country. Kanaan don't get to soft on this. Tge answer is not for them to stay in lebanon. It must be resolved.

So if they are born in a chicken farm they become chicken? Clear the camps, send them all home. Not wanted !

Yes they will go home, and we will send back all Lebanese who lives in welfare from Canada and Europe

To minlibnan
Those people did not start the war in Lebanon, and you know that very will who did!!!!
Your country has to provide minimum human rights to them.
Same what did to thousand of lebenese here in Canda.