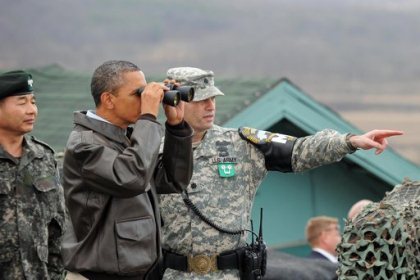 U.S. President Barack Obama warned North Korea Sunday that its "bad behavior" would be thwarted and the country would only deepen its isolation if it carried out a planned rocket launch.

"North Korea will achieve nothing by threats or by provocations," Obama said in a joint news conference with South Korean President Lee Myung-Bak on the eve of a nuclear security summit in Seoul.

Lee also said he and Obama agreed that the long-range rocket launch planned for next month would be "a provocative action that threatens global peace and is against U.N. resolutions.

"President Obama and I have agreed to respond sternly to any provocations and threats by the North and to continually enhance the firm South Korea-U.S. defense readiness," Lee said.

The North has announced it will fire the rocket to put a satellite into orbit between April 12-16 to mark the 100th anniversary of the birth of founding president Kim Il-Sung.

Washington and Seoul say the launch would be a disguised missile test which would breach U.N. Security Council Resolution 1874 banning any ballistic missile tests by the communist state.

But the North has insisted it has a right to launch a satellite for what it says are peaceful purposes.

South Korea's defense ministry said Sunday that the North had transported the rocket's main body to a site in the far northwest of the country in preparation for the launch.

Obama told U.S. troops in a dining hall at Camp Bonifas near the border they are part of a "long line" of soldiers who have enabled South Korea to prosper.

"You guys are at freedom's frontier," he said. "The contrast between South Korea and North Korea could not be clearer, could not be starker.

"I could not be prouder of what you do."

The U.S bases 28,500 troops in the South. The White House said the president's visit to the Demilitarized Zone surrounding the border was to express his appreciation to them and stress commitment to the South's security.