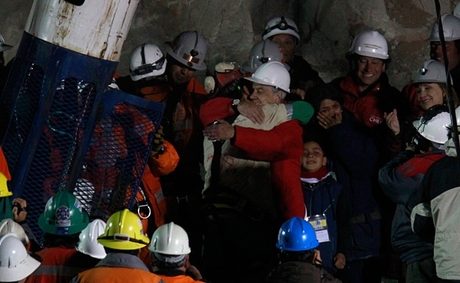 Wild celebrations erupted Wednesday as the first of 33 men trapped underground for 10 weeks in a collapsed Chile mine triumphantly returned to the surface in a landmark rescue operation.

A powerful light danced across the twilight sky when 31-year-old Florencio Avalos stepped out of a special steel rescue cage and breathed in the fresh air for the first time in 69 days.

He immediately hugged his seven-year-old son, then his wife Monica, followed by Chilean President Sebastian Pinera and other officials before being taken to a field hospital for the first of many medical tests.

His rescue marked the culmination of a record-breaking two-month drama, during which the 33 men awaited rescue at the bottom of the dark, dank mine with the world captivated by their daily hopes and fears.

Hundreds of relatives, who have maintained an anxious vigil in a makeshift tent city which has sprung up around the remote gold and copper mine in the northern Chile desert, cheered and wept.

Avalos's family, who watched the moment he stepped free on live television, rose and clapped with tears in their eyes.

His father Alfonso raised his arms in triumph before hugging his wife and daughter, his face creased with emotion as he exclaimed: "It's a huge joy. I'm so happy."

Hundreds of journalists crowded around them, jostling so forcefully to capture the historic moment they toppled the tent and trampled each other.

The family, caught between relief and sudden fear, clung to each other in the media storm.

Elsewhere in the camp, animated television reporters recounted the epic tale of survival to audiences around the globe.

The miners -- 32 Chileans and one Bolivian -- have survived deep underground longer than anyone before them.

They were trapped on August 5 when the upper galleries of the mine collapsed.

For 17 days they were all but given up for dead, before a drill probe found them and they were able to attach a note to it, announcing the extraordinary news that they were all alive and well.

They had survived by strictly rationing their food and water, and had found refuge in an emergency shelter.

Now, after a multi-million operation to drill down a rescue shaft, they are being brought out of the mine one by one in a specially-designed narrow steel cage, dubbed Phoenix to symbolize their rebirth.

Avalos, who left behind his brother, Renan, was to be followed by Mario Sepulveda, 39, an electrical specialist, then 52-year-old Juan Illanes, and then Carlos Mamani, the only Bolivian in the group.

Each miner, equipped with oxygen and communications gear, was being slowly brought to the surface, winched up the narrow shaft that was only completed last weekend.

Their tense ascents will take around 15 minutes as the cage climbs 622 meters (2,041 feet) -- nearly the height of two Eiffel Towers stacked on top of each other.

With another 20 minutes or so needed to drop the cage down the shaft again, and a little time required to strap each miner into the contraption, a total of one hour was estimated for each man's salvation.

But Avalos was brought up to the surface quicker than expected, raising the prospect that the rescue could be completed even quicker than relatives had dared to hope.

Chilean President Sebastian Pinera was at the entrance of the mine to witness the start of the rescue effort, which officials expected to complete by late Thursday.

Each miner stepping out of the cage was being greeted by up to three family members and waiting doctors before being flown to a regional hospital for at least two days of check-ups.

The men have become national heros as Chilean officials have worked feverishly to sustain them during their long wait for rescue -- which some initially feared would not be before Christmas.

Food, water, oxygen, entertainment and communication lines were dropped down to them through probe holes to help them survive the prolonged captivity in hot, dank conditions that they have described as "hell."

Many of the men suffered skin conditions due to the humidity, while others have chest infections and blood pressure problems.

But the men, who have dubbed themselves "the 33," have formed a closely-knit group, and there was said to have been squabbling about who should be the last to leave, with many of the men wanting to see their comrades winched to safety ahead of them.

When all the miners do make it to the surface, they will leave behind dark isolation for a blaze of publicity normally reserved for movie stars or sporting heroes.

Chilean media reports suggest the men are anticipating lucrative book and film deals that may limit what they end up saying to the waiting news media.(AFP)