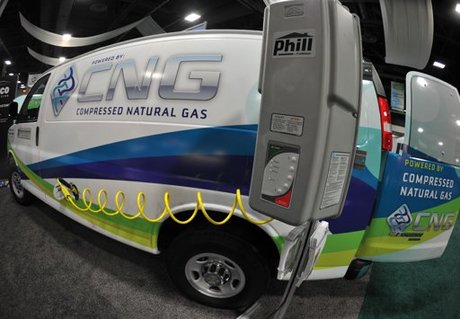 Natural gas, whose price is at record lows thanks to a shale drilling boom, is gaining traction as an alternative energy in the United States, with automakers jumping on the bandwagon.

The use of natural gas instead of oil-based gasoline to drive the country's cars and trucks "is definitely starting to take off," said Mark Hanson, an analyst at investment research firm Morningstar.

"The economics seem to work," he said, noting it was "just a question of what pace" the necessary infrastructure will take to develop.

Gas is in focus as a potential engine fuel because "it is tremendously good fuel," said David Cole, the chairman emeritus of the Center for Automotive Research.

Unlike gasoline, whose rising prices are causing pain at the pump for consumers, natural gas is cheap in the United States as supplies bulge from production in the country's vast shale gas formations.

Thus, it is considered a "green" fuel even though in its raw state, the methane it emits is more destructive to the Earth's ozone layer than CO2, and the artificial fracturing of gas shales, known as "fracking," has drawn fire from environmentalists.

There are several forms of natural gas used to power vehicles. Compressed natural gas (CNG) is pressurized gas stored in a similar way to a vehicle's gasoline tank.

Liquefied natural gas (LNG) is produced by chilling natural gas to about minus 260 degrees Fahrenheit (minus 162 degrees Celsius). It can be used as engine fuel for heavy ground or maritime vehicles.

In Europe, the fuel of choice for automobiles is liquefied petroleum gas, typically a mixture of butane and propane made from refined crude oil or natural gas.

Across the Atlantic, the three big U.S. automakers are pumping out vehicles based on alternative fuels.

The smallest U.S. car maker, Fiat-controlled Chrysler, in early March unveiled a pick-up truck than can use liquefied natural gas, which will go on sale in June.

Sergio Marchionne, the chief executive of Fiat and Chrysler, views natural gas as having greater potential than electricity to power vehicles.

General Motors, the US giant at the top of the global auto industry, produces two vans that use compressed natural gas, the Chevy Express and the GMC Savana, and will begin production by the end of the year on two pick-up trucks running on CNG.

GM already has sold 1,200 of the vans to U.S. telecommunications titan AT&T.

The Detroit, Michigan auto maker is working on a number of different alternative fuels and particularly on electric vehicles.

But a GM spokesman, Dan Flores, said: "We think compressed natural gas offers a lot of potential. The technology is promising."

It is particularly appealing to businesses, especially service providers such as telecoms, package deliverers like UPS, or to local governments, which operate trash removal or emergency vehicle fleets.

CNG vehicles operate at relatively short distances from a refueling hub. The economies of scale for a large business or public body can potentially justify the cost of an investment in the specialized refueling equipment.

For individual consumers, the refueling infrastructure is limited. And compressed or liquefied gas is expensive and requires substantial storage capacity, restricting the vehicles' range.

Morningstar's Hanson said that currently there are only about 400 CNG stations in the U.S.

In Europe, natural gas also is sparking interest amid rising gasoline prices, but so far it remains only a small portion of the market.

In France, for example, it represents less than one percent of the vehicle fuel consumed and only 200,000 vehicles are outfitted for liquefied petroleum gas, of the 31 million privately owned.