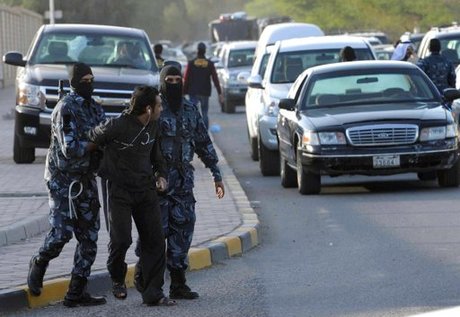 Kuwait on Thursday condemned Sunni activists for setting ablaze an Iranian flag during a rally to protest a Shiite tweeter's insults against Islam's Prophet Mohammed.

A foreign ministry official expressed his "rejection and condemnation of this irresponsible action," the official KUNA news agency reported, citing a statement.

The statement said the action, "made by a deviant group," is considered a "breach of the laws and norms and greatly undermines the distinguished relations between Kuwait and its (Shiite) neighbor Iran."

The gathering was staged Wednesday night by Sunni activists and several MPs a day after authorities arrested a Shiite alleged to have made remarks on the micro-blogging website Twitter that were deemed offensive to the prophet, his wife Aisha and some companions.

The Shiite, identified in media reports as Hamad al-Naqi, was in custody pending further investigation amid a frenzy of condemnation by Sunni preachers and MPs, some of them demanding the death penalty for the man.

The foreign ministry official reiterated Kuwait's keenness to maintain good relations with Iran and vowed legal measures would be taken to curb such actions.

Sectarian tensions have flared in Kuwait between the Sunni majority and Shiites, who form about a third of the native population of 1.17 million, reflecting rising regional tensions between the two Islamic sects.

why all this Sunni/Shia emphasis on naharnet? When will Arabs understand that sectarian agitation is the tactic of occupation...