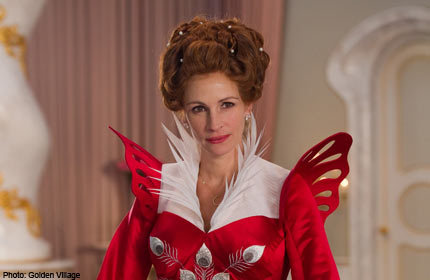 Julia Roberts has taken time off from Hollywood of late to focus on her three young children -- but admits she enjoys being back on the big screen, as a fairytale villain in her latest movie.

Playing the evil Queen in "Mirror Mirror," a new version of Snow White, marks a departure for the US actress, whose career has included everything from campaigning lawyer to high-class call girl and celebrity love interest.

Directed by Indian filmmaker Tarsem Singh -- who made last year's "Immortals" -- the movie based on the famous Brothers Grimm children's tale opens in the United States on Friday.

Roberts, who at 44 remains one of Hollywood's most bankable stars, made her name in films including 1990's "Pretty Woman" and "Erin Brockovich" in 2000, and said she never thought she would appear in a fairy tale.

"Just the one sentence pitched over the phone: 'Hey, they're doing this Snow White adaptation,' that didn't grab my attention. I didn't have any interest in this one, really, until Tarsem lured me in his lurid way." she told reporters.

"And I looked at the script and realized that there was really something here."

The film tells the story popularized around the world by Disney, but gives it a different, sometimes comic or even absurd twist, creating a visual universe sometimes closer to "Alice in Wonderland" than the Brothers Grimm.

For Roberts, the film is less about making it different from Disney, but more "changing the tone of it, just giving a different relationship" between the Queen and Snow White, played by young British actress Lily Collins.

"I think people like variations on things," Roberts said.

"It was fun to play this villain, because there aren't any real rules of syntax or reality that apply to her. So I could kind of do anything and just go off the rails in any direction at any time, and it would make sense to me.

"In that regard, it was a lot of fun. You don't have to worry too much about 'Would a person really do this?'"

But she added: "I'm happy to announce (that the Evil Queen) is not inside me... Without naming names, I drew from a couple of people I know better than I wish I did, and found it very fun and helpful."

Collins, the 23-year-old daughter of British musician Phil Collins who moved to Los Angeles at the age of five after her parents split, says her character is also given a modern twist.

"The way that we modernized Snow White was making her this modern day girl that can save the prince just as easily as the prince can save her," she told reporters.

"She becomes a fighter physically and emotionally and goes from this young wide-eyed innocent princess that everyone grew up knowing, to a young woman who finds within herself the strength to fight for what she believes in."

The director is happy with his new take on the classic story. "Fairy tales have always evolved. Before the Grimm Brothers, Snow White was a very dark tale," said Singh.

"It was always supposed to be Snow White's mother that did that, not her stepmother. But at that particular point it was suddenly deemed not right to put the mother in that particular position and they changed it.

"You have to evolve and change it. You take those challenges and then you still try to figure out what is acceptable for the audience."

While "Mirror Mirror" is a family film, Roberts says she nevertheless has no plans to show it to her 7-year-old twins Hazel and Phinnaeus, or 4-year-old Henry, anytime soon.

"We have a pretty rigid viewing feeling in our house. We're more book people in our house. I mean, we'll find our time that'll be happy and joyous for us to share that all together, but it probably isn't in two weeks," she said.