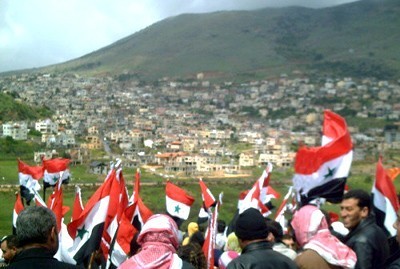 More than 15,000 people in Jordan, including opposition Islamists and trade unionists, held a peaceful sit-in near the border with Israel on Friday to mark Land Day.

Waving Jordanian and Palestinian flags, the demonstrators carried banners reading: "Freedom for Jerusalem and freedom for Palestine," and "Jerusalem, here we come," as they gathered in Kafrein, some 10 kilometers (six miles) from the border crossing and barely a kilometer and a half (a mile) from the frontier.

"We will not forget you Jerusalem. Down with the Wadi Araba agreement," they chanted, referring to the 1994 peace treaty between Jordan and Israel.

"The Israelis have stolen Palestine. We will return to the Holy Land and restore our rights. We will not forget their crimes," Hammam Said, leader of Jordan's powerful Muslim Brotherhood, told the demonstrators.

Land Day commemorates the deaths of six Arab Israeli protesters at the hands of Israeli forces during mass demonstrations in 1976 against plans to confiscate Arab land in northern Israel.

"Jerusalem is still the key to war and peace. Peace will not prevail unless Jerusalem is liberated," said former prime minister and intelligence chief Ahmad Obeidat, who heads the National Reform Front.

A police spokesman told Agence France Presse: "Security presence normal," adding: "It's a peaceful sit-in and everything is under control."

Among the demonstrators, who included women and children, were four rabbis from the anti-Zionist ultra-Orthodox group Neturei Karta.

"We are here to mark Land Day, and tell the world not to blame Jewish people for the crimes of Zionism," Rabbi Ahron Cohen told AFP.

During what was billed as a "World March for Jerusalem" held under the banner "Millions of Syrians want Palestine back," they chanted: "We will return to Palestine: We promise all the dead and Arab martyrs we will arrive in Jerusalem."

The protesters waved Syrian flags and also those of Damascus allies Russia and China, as well as the flag of Lebanon's Hizbullah, chanting: "Lions of Syria, lions of the resistance."

The gathering was held in the city's central Sbaat Bahrat square, often the venue for demonstrations backing the regime, whose crackdown on a year of protests the U.N. estimates has killed more than 9,000 people.

What does Assad have to do with the liberation of Palestine? He has never allowed Palestinians to launch operations from Syria against Iran. Also funny that the march of millions was actually a few hundred.

The Truth (Guest) Assad was clever by not allowing terrorist groups to act from Syria.
Unlike Lebanon who considered to be the "Switzerland of the Mediterranean" and since it opens its legs to the entrance of armed terror gangs Lebanon did not have one day of rest.
You have to understand that Israel will do all efforts to protect its inhabitants no matter what and the results of Lebanese governments who allowed free entrance and allowed those groups acting from Lebanon against Israel and Jewish targets all over the world, the dear price of destruction the Lebanese people paid till this very moment.
Sorry to say that destruction and death will return to Lebanon if its government and army will allow the Iranians's messengers to act against Israel.
Now as those terrorists are part of your government nobody can claim that "Its not us its them" who did it.