In Canada, the Penny's about to Drop into History 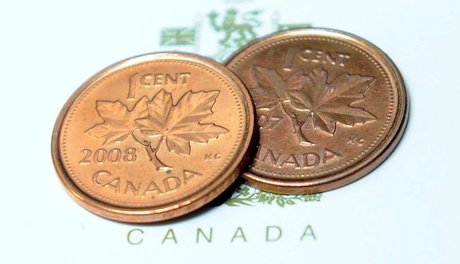 They clutter your dresser and cost too much to make. They're a nuisance and have outlived their purpose.

Finance Minister Jim Flaherty was talking about the Canadian penny and why the Royal Canadian Mint will end its production this fall as part of his austerity budget.

"The penny is a currency without any currency in Canada, and it costs us 1.5 cents to produce a penny," Flaherty told reporters.

Responses Friday were mixed, with some Canadians saying it would make life easier, while others worried it would become an opening for sneaky price hikes.

David Berman, a blogger at the Toronto Globe and Mail, took issue with Flaherty calling the penny a nuisance. "For a government that has been warning Canadians against piling on too much debt, it seems like a contradiction to then denigrate the one-cent coin — hey, it's still money — as nothing more than a waste of space. It isn't."

Flaherty said a Canadian senate committee held hearings on the penny last year and not one witness came forward to say it should be spared.

A government statement said New Zealand, Australia, the Netherlands, Norway, Finland, Sweden and others "have made smooth transitions to a penny-free economy." It said penny production cost $11 million a year, and that the coins, which feature two maple leaves and Queen Elizabeth II in profile, would remain legal tender until they eventually disappeared from circulation.

It said it expected businesses to round out the numbers on price tags where necessary.

"Our members are not opposed to the proposal as long as the proposed system of rounding is adequately explained to Canadians. That's the sweet spot. We've got to make sure people understand what's going on," said Sally Ritchie of Retail Council of Canada.

Ralph Moyal, President of the Retail Merchants' Association, said dropping the penny might speed up transactions.

"Pennies are unnecessary and no longer have any function," Moyal said. "I haven't heard any complaints from our retailers."

In Toronto, Mary Pascale, who co-owns a gourmet food shop, agreed the penny was a nuisance and said she already rounds out prices to the nearest 5 cents. Otherwise "it takes time to count all the change."

Theo Danilov, a web developer, said: "I am happy about having less change in my pockets." But he had qualms about the rounding up, saying: "It's another way for merchants to nickel and dime their customers."

Brian Grant Duff, a Vancouver coin collector and dealer, said he'll mourn the penny but acknowledged there's very little use for it.

"It's sad for collectors and history buffs. It makes you think of all those expressions — a penny for your thoughts or having a lucky penny," he said. "I was born in the mid '60's, so even in my lifetime there hasn't been a lot you can buy with a penny. And now if you walk down the street most people would be too ashamed to pick up a penny or wouldn't bother, and they probably wouldn't feel too good about handing a penny to a homeless person."

As for the U.S., however, he said: "It's hard for me to imagine the Americans saying, 'That's it, we're getting rid of the penny. It's got Lincoln's head on it.'"

The U.S. Treasury Department cited a statement from Treasurer Rosie Rios from earlier this year when asked about the Canadian decision. She said the Obama administration has looked at possibly using cheaper materials to make the penny, which is now made of zinc.

That's quite a difference from when candidate Barack Obama was campaigning to become president.

"We have been trying to eliminate the penny for quite some time — it always comes back," Obama said at the time. "I need to find out who is lobbying to keep the penny."

Two separate bills calling for the demise of the penny, introduced in 2002 and 2006 by Republican congressman Jim Kolbe, failed to advance in the U.S. House of Representatives.

The American zinc lobby has been a major opponent to suggestions that the penny be eliminated. Another advocacy group called Americans for Common Cents passionately defends the tiny coin.

"Eliminating the penny is a losing proposition because it will result in rounding to the nearest nickel and higher prices for America's working families," a statement on the group's website reads.

"This increased cost to consumers will be felt in everything from the grocery store to the gas pump. Pennies add up to millions of dollars every year for charities across the country. Simply put, the penny plays an important role in our everyday lives and in our nation's economy."