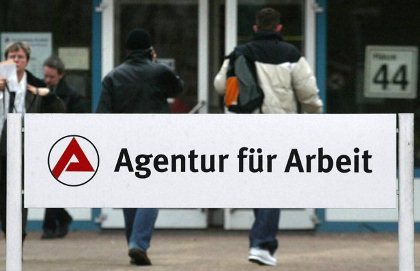 Eurozone unemployment jumped to an all-time high in February, hitting southern nations the hardest as the social toll from the debt crisis grips the 17-nation bloc, official figures showed Monday.

The jobless rate rose for the 10th consecutive month, hitting 10.8 percent to set a 15-year record for the 17 nations sharing the single currency, according to the Eurostat agency.

Eurozone leaders have vowed to pursue growth and jobs strategies to fend off a looming recession but they insist that unpopular budget cuts and structural reforms must continue in order to restore market confidence after two years of crisis.

In another sign that recession is gripping the region, a key survey showed that manufacturing activity dropped to a three-month low in March, with the "malaise" spreading to top economies Germany and France.

"It looks odds-on that Eurozone GDP contracted again in the first quarter of 2012 after a drop of 0.3 percent quarter-on-quarter in the fourth quarter of 2011, thereby moving into recession," said Howard Archer, chief European economist at IHS Global Insight.

"The prospects for the second quarter of 2012 currently hardly look rosy," he said, adding that unemployment also appears "odds-on" to top 11 percent in 2012.

The Eurostat data agency estimated that more than 17.1 million men and women were out of work in February, 162,000 more than a month earlier and 1.48 million more than a year ago.

The seasonally-adjusted unemployment rate also rose to a record in the wider, 27-nation European Union, hitting 10.2 percent in February compared to 10.1 percent the previous month.

An estimated 24.55 million people were unemployed in the EU, an increase of 1.87 million from February 2011.

"But even in Germany, survey measures of hiring point to a downturn to come and with inflation remaining stubbornly high throughout the eurozone, there is very little hope of a consumer recovery," McKeown said.

The unemployment rate rose in 18 EU states and fell in eight compared to a year ago. It remained stable in Romania.

Spain remained the worst affected, with the highest rate at 23.6 percent, followed by the bailed-out Greece at 21 percent, Portugal at 15 percent, and Ireland at 14.7 percent. Italy hit a record 9.3 percent.

Highlighting the North-South divide, the states with the lowest rates were Austria on 4.2 percent, the Netherlands 4.9 percent, Luxembourg 5.2 percent, and Germany 5.7 percent.

Unemployment is highest among young people, with data showing one in five persons under 25 looking for work in the eurozone, mainly in southern nations. One in two young Spaniards or Greeks are unemployed.

The weaknesses in the so-called 'periphery' appears to be spreading to 'core' nations in the eurozone, according to the Purchasing Managers Index (PMI) of manufacturers compiled by Markit research firm.

The PMI, a survey of 3,000 eurozone manufacturers, fell to 47.7 points in March from 49 points in February. A score below the neutral 50 mark indicates contraction.

A decline in new orders and the rise in oil prices, which weighed on production costs, contributed to the decline in eurozone manufacturing activity.

The survey also indicated that manufacturing employment fell for the second straight month, with the highest pace of job losses for two years.

With oil prices putting pressure on consumer prices, the stream of data will complicate the task of the European Central Bank, which is expected to keep its main interest rate unchanged for the fourth month in row when it next meets.