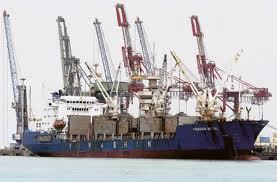 Iran's non-oil exports surged 29 percent to nearly $44 billion in the year to mid-March despite tough Western sanctions to rein in Tehran's disputed nuclear drive, according to officials and data.

Exports of non-oil products during same period a year before were worth $34 billion, excluding technological services.

But more than half of what the exports generated were raised by a large growth in the amount of petrochemical products and gas condensates exported, figures released by Iran's customs showed.

The boost was realized due to an increase in Iran's production of the two products in the past year, and their rising value in the global markets because of soaring oil prices.

The export of petrochemicals saw a 55-percent boost, amounting to $15 billion, and that of gas condensates was raised by 36 percent, bringing in $10 billion, according to the figures.

China, the United Arab Emirates -- which acts as the hub for the re-export of goods to Iran -- as well as Iraq and India have emerged as the main destinations for the country's non-oil goods.

For its oil exports, Iran, the OPEC oil cartel's second largest producer, is estimated by Iranian media to have generated $100 billion during the same period.

Iran earned about $78 billion by exporting oil during the year before that. It exports most of its crude oil to China, India, Japan and South Korea. Official figures for the past year have yet to be released.

The sharp increase in Iranian exports came against the backdrop of a tough trade and financial sanctions regime put in place since 2010 by Western powers that fear Tehran's nuclear programme masks a military dimension.

But Iran insists it is only seeking to master an atomic energy cycle.

Officials have in recent months regularly used the rising exports to portray as ineffective the sanctions, which will be further tightened in July when Iran's crucial oil sector is targeted.

Western economic experts in Tehran say the rise of Iranian exports is mainly due to soaring global oil prices.

Iran's oil production, now about 3.5 million barrels per day according to OPEC, has declined steadily since 2008, while sanctions have significantly slowed the Islamic state's efforts to develop its energy sector and produce and export its gas, they told Agence France Presse on condition of anonymity.

The experts also point out that Iran is finding it increasingly difficult to repatriate foreign currency for its oil exports, and has thus resorted to accept various forms of direct or indirect barter with many customers.

wooo hooo carpets will be on sale again!!