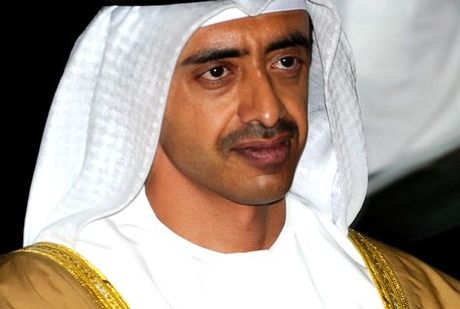 "Sheikh Abdullah blasted the visit as a 'flagrant violation' of UAE sovereignty over its territories and a setback to all efforts and attempts the UAE is making to find a peaceful settlement to Iran's occupation of the three UAE islands," WAM reported late on Wednesday.

"This visit will not change the legal status of these islands which are part... of the UAE national soil," the English-language statement said.

During his visit to Abu Mousa Island on Wednesday, Ahmadinejad insisted historical documents proved "the Persian Gulf is Persian," according to the official IRNA news agency.

The Iranian leader said the name "Persian Gulf" derived from the "culture, civilization and the dominant opinion" of the area.

"Since a few thousand years ago, the main culture in most of the world was the Iranian culture and civilization, and it is clear that the naming (of the waterway) would be based on the name of this culture and land.

"I am not worried about some claims to the Persian Gulf at all, because only one who is weak would be worried" about such claims, Ahmadinejad said.

Sheikh Abdullah, who visited Iran in February, said Ahmadinejad's move and "provocative rhetoric... exposes Iran's false allegations regarding its keenness to establish good relations... with the UAE and countries of the region."

The Emirati minister said Ahmadinejad's actions come at a time "when the two countries agreed to exert more joint efforts" to resolve their dispute. "The visit... was a gross breach of this agreement."

He urged Iran "to take measures and stances that strengthen confidence between countries and people of the region and refrain from such provocative" acts.

Iran, under the rule of the Western-backed shah, gained control of the islands of Abu Mousa, Lesser Tunb and Greater Tunb in 1971, as Britain granted independence to its Gulf protectorates and withdrew its forces.

Abu Mousa, the only inhabited island of the three, was placed under joint administration in a deal with Sharjah, now part of the United Arab Emirates.

But the UAE government says the Iranians have since taken control of all access to the strategic island and installed an airport and military base there.

With someone looking like him, violating his sovereignty by anybody is a very welcome thing. I mean, just look at him. It's like he's asking for it.

Perhaps an arrangement could be made whereby Iran withdraws its military forces from the island when the US withdraws its naval and army command centers from Bahrain and Qatar respectively. And Israel disarms its religious police and paramilitary units ("IDF", "IAF", "Mossad", "Shabak", etc.).

Hey Mahmoud.....don't forget the Greeks kicked your ass four times and sent your Persian king running for his life. Was that Persian culture too?