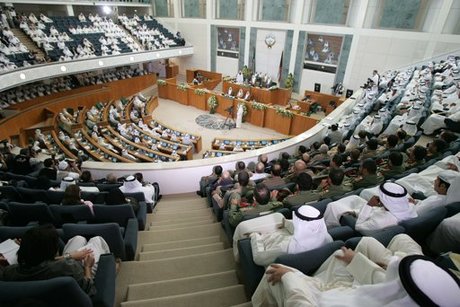 Kuwait's parliament on Thursday provisionally passed amendments to the Gulf state's penal code stipulating the death penalty for those who curse God, Islam's Prophet Mohammed or his wives.

Forty-six MPs, including cabinet ministers, voted for the key amendments that will come into effect only after another round of voting and government approval. The second and final vote will take place in two weeks.

Shiite MPs have demanded that the new amendments also enforce the death penalty for anyone who curses their sect's 12 revered Imams, but the Sunni- dominated parliament rejected their requests.

The move to stiffen penalties for religious crimes came after authorities last month arrested a Shiite tweeter for allegedly cursing the Prophet Mohammed, his wife and some companions.

The suspect, Hamad al-Naqi, is being detained pending further interrogation and trial.

Sectarian tensions have flared in Kuwait between the Sunni majority and Shiites, who form about a third of the native population of 1.17 million, reflecting rising regional tensions between the two Islamic sects.

So now the killing is done legally without the help of the vigilantes of God known as Al Qaida among other names. MABROUK. ila al amam dorr ya qotr