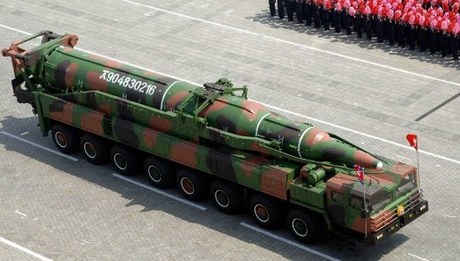 In a defiant statement late Tuesday, the isolated nation also broke off an agreement with Washington to halt testing of nuclear weapons and long-range missiles, raising fears Pyongyang would stage a new atomic test.

"We believe that maintaining peace and stability on the Korean peninsula is in the interest of all parties ... Dialogue and negotiation is the only correct way out," foreign ministry spokesman Liu Weimin told journalists.

"We hope relevant parties will exercise calm and restraint, maintain engagement and dialogue and continue to uphold the denuclearization process on the Korean peninsula."

The North on Friday went ahead with what it said was a rocket launch to put a peaceful satellite into orbit, drawing condemnation from world leaders who said the exercise was a disguised ballistic missile test.

The launch quickly failed when the rocket exploded over the Yellow Sea, and the United Nations Security Council on Monday issued a condemnation that was also backed by China -- the North's only major ally.

Analysts say they expect the North to now stage a third nuclear weapons test, following previous tests in 2006 and 2009, or launch another long-range missile.

Liu urged the International Atomic Energy Agency to resume contact and dialogue with North Korea in the apparent hope the two could seek a way forward for the U.N. atomic agency to inspect North Korean nuclear facilities.

But he would not comment on reports that Beijing has suspended a deal with Pyongyang to repatriate North Korean refugees who had fled to China because it was not consulted about the launch.