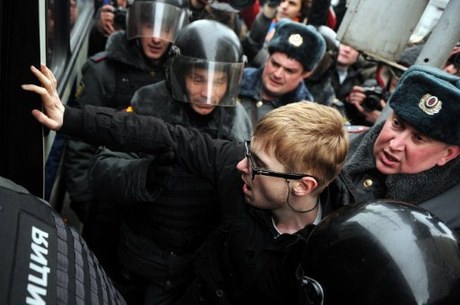 Russian authorities sought on Wednesday to calm mounting anger at shocking cases of police brutality by creating a special unit for crimes committed by the vast, corruption-tainted force.

The powerful Investigative Committee's decision to form the police crimes division follows a spate of reports of officers -- many of them in their early 20s or straight out of school -- torturing suspects to death.

The cases have created a furor in the state-controlled media and dealt a blow to outgoing President Dmitry Medvedev's promise to make police reform a chief accomplishment of his stint as Vladimir Putin's Kremlin stand-in.

Investigative Committee spokesman Vladimir Markin said his agency had been flooded with 78,000 complaints against law enforcement authorities that resulted in 4,400 criminal cases being launched in the past year alone.

"The need to create such a special unit is based on objective reasons," the Investigative Committee said in a separate statement.

It said investigators looking into police crimes often run into "certain difficulties" because officers and their bosses use their professional skills "to mislead the investigation and avoid criminal responsibility."

Russia's police and other law enforcement authorities have developed a notorious reputation for protecting their own against outside investigations and past probes into such offences have rarely met with success.

But the death in custody of a petty crime suspect who was raped with a champagne bottle by interrogating officers has focused attention on a problem that has quietly dogged Russia for most of the past two decades.

Investigators said they have received 65 complaints against the same police precinct in the prospering central Russian region of Tatarstan since the case initially came to light last month.

Interior Minister Rashid Nurgaliyev was also forced to report to parliament about the incident last week amid media speculation that his job was on the line.

Nurgaliyev's massive police force has been reported by various media to have been working together with prosecutors to cover up deadly crimes and corruption committed by its own staff.

This alliance at one stage prompted the Kremlin to put more powers in the Investigative Committee -- a once relatively powerless agency that is now run by one of Putin's most trusted allies.

The Investigative Committee has been locking horns with the country's prosecutors for years over high-profile cases of alleged gambling and protection rackets being run by the Russian police.

But the deputy head of parliament's security committee said he did not expect a police "war" to break out over the Investigative Committee's emerging role.

"This will only help the quality of investigations," ruling party member Ernest Valeyev was quoted as saying by ITAR-TASS.