Jumblat: We Will Not Participate in March 13 Rally because it Incites Strife and Sectarianism 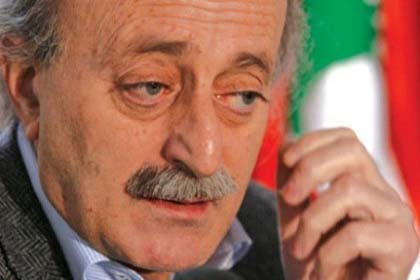 Progressive Socialist Party leader MP Walid Jumblat announced on Monday that the party will not take part in Sunday’s March 14 rally “as we can only remain in a position that would protect the peace and Lebanon’s unity.”

He said during his weekly editorial in the PSP-affiliated al-Anbaa magazine: “The party has never prevented the citizens from expressing their opinions but it knows that the people are responsible enough to refuse to participate in an occasion where speeches will be aimed at inciting strife, hatred, and sectarianism.”

He noted the “striking” difference between the youth demonstrations aimed at ending sectarianism and the slogans of “sectarian incitement aimed at creating strife” being issued by the March 14 camp.

He said: “The youths are calling for a country devoid of sectarian discrimination while another power only calls for this discrimination.”

“The debate over the weapons has returned to the forefront without taking into consideration the possibility of completely exposing Lebanon before Israel,” he added.

“We have reached an agreement that the weapons should not be used against fellow Lebanese, but we cannot accept that the country be exposed before Israel as we haven’t forgotten Israel’s never-ending spiteful assaults towards Lebanon,” the MP stated.

Jumblat continued: “The PSP has the boldness to reconsider its actions … and such steps have served to curb strife and protect the peace.”