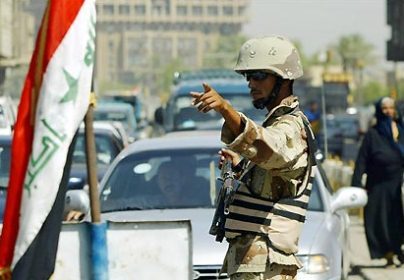 A bodyguard working for one of the main parties in Iraq's Sunni-backed Iraqiya bloc, which has clashed politically with Prime Minister Nouri al-Maliki, was killed on Wednesday, officials said.

Latif Ramadan Jassim was on duty near the headquarters of the Wifaq (Accord) party in Zeitun, west Baghdad, when he was stabbed to death on Wednesday morning, party spokeswoman and MP Intisar Allawi told AFP.

"The police are now conducting an investigation," she said.

An Interior Ministry official confirmed a Wifaq guard was killed in Baghdad on Wednesday.

It was not immediately clear why Jassim was attacked.

Wifaq is one of the main parties in the broader Iraqiya coalition, which won the most seats in March 2010 parliamentary elections but was outmaneuvered for the premiership by Maliki's State of Law alliance.

Iraqiya began a boycott of parliament and then the cabinet in December, accusing Maliki of concentrating power in his hands, though the boycotts were lifted in January and February, respectively.

On Tuesday evening, an Iraqi journalist working for the Al-Rasheed satellite TV channel was wounded when two magnetic "sticky bombs" attached to his car detonated in south Baghdad.

Majid Hamid, 32, had been visiting his cousin's home in Saidiyah, and upon leaving, the bombs went off, according to Ahmed Mullah Tallal, an anchor on Al-Rasheed.

Violence nationwide is markedly lower than in 2006 and 2007 but attacks are still common, especially in Baghdad, Mosul and Diyala. A total of 126 Iraqis were killed in violence in April, according to official figures.