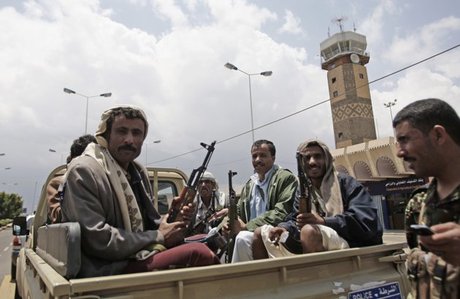 A suspected member of al-Qaida was killed when a bomb he was trying to plant at a checkpoint run by a local militia in Yemen's restive Abyan province exploded, a tribal source said on Tuesday.

The explosion took place late on Monday in Mudia, one of only two towns in Abyan -- along with Loder -- that has not yet fallen under the control of the extremists.

In a bid to keep out the jihadists, locals have formed anti-Qaida militias known as Popular Resistance Committees, which fight alongside the army.

The militants on Monday launched attacks on two army posts outside the provincial capital Zinjibar, killing at least 22 soldiers to avenge the death in an air raid of top militant Fahd al-Quso, who was wanted in connection with the deadly 2000 bombing of the USS Cole.

The jihadists, who have named themselves the Partisans of Sharia (Islamic law), control parts of southern and eastern Yemen where Sanaa's authority is weak -- including the Abyan provincial capital Zinjibar.

The Yemen-based al-Qaida in the Arabian Peninsula (AQAP) is classified as the most active branch of the terror network.

Officials in Washington said on Monday that the United States had foiled a plot by AQAP to blow up a U.S.-bound passenger jet with a new take on the "underwear bomb" near the first anniversary of Osama bin Laden's death.