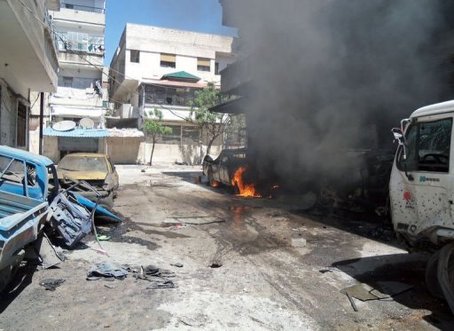 Troops pounded a rebel hideout near Damascus as renewed violence across Syria killed at least four people on Wednesday, among them three soldiers and one civilian, a rights watchdog said.

Clashes between regime forces and armed rebel groups in the village of Marata village, northwestern Idlib province, killed one soldier as he tried to flee the shooting, said the Syrian Observatory for Human Rights.

Several Syrian soldiers were killed in Daraa and more wounded when an explosion targeted their vehicle in the neighborhood of Manshiya, the Observatory reported.

"We know there were casualties, but we do not know how many," the Observatory's Rami Abdel Rahman told Agence France Presse.

In the town of Harasta, outside Damascus, security forces conducted raids, arresting dozens of residents, the watchdog reported.

In the eastern province of Deir al-Zour, security forces carried out similar operations in the villages of al-Safira and al-Hisan.

Two members of Syrian security forces were killed soon after midnight in the Jura district of Deir al-Zour, the scene of heavy shooting and explosions, the watchdog reported.

One civilian was killed and three wounded Wednesday in heavy machinegun fire by regime forces in Tell Ain al-Hamra, near the town of Jisr al-Shughur in the northwestern province of Idlib, on Wednesday.

U.N. envoy Kofi Annan on Tuesday said his peace plan that went into effect April 12 but has since been regularly violated by both sides to the conflict was "probably the last chance to avoid civil war" in Syria.

Nearly 12,000 people, mostly civilians, have been killed in Syria since an anti-regime uprising erupted in mid-March last year, according to the Observatory.