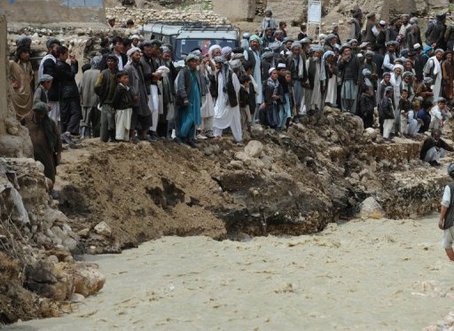 "It hit around midnight and it was very powerful," said Taqwa.

"We have 28 deaths in Ishkamish district and 20 others are believed to be missing," the governor said.

"It is a big disaster he added," warning that the death toll was likely to rise.

Dozens of houses were washed away and roads blocked, he added. The flood-hit areas are accessible only by air.

Rescuers are trying to reach the area by helicopter, taking food, blankets and tents to the victims.

On Monday, at least 26 people were killed and more than 100 missing after flash floods hit a wedding party and three villages in Sari Pul province.

Afghanistan's harshest winter in 15 years saw unusually heavy snowfalls, and experts predicted melting snow was likely to cause floods in the mountainous north in the spring.

According to IMMAP, a data-analysis and mapping company, 15 percent of Afghanistan’s population is at high risk of being affected.

In March, the U.N. humanitarian office for Afghanistan said at least 145 people were missing and "presumed dead" after an avalanche hit a remote village in northeastern Badakhshan province.

Despite the billions of dollars in aid from the international community after the collapse of the Taliban, Afghanistan remains among the poorest nations in the world, weakened by decades of conflict.