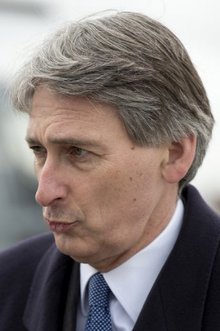 Britain's defense secretary said he had finally balanced his department's books, in an interview out Sunday, following a week in which he made a U-turn on purchasing jets, to the annoyance of France.

Philip Hammond told The Sunday Times newspaper that he will be able to announce this week that he has fixed the £38 billion ($61 billion, 47 billion euro) so-called "black hole" in the Ministry of Defense (MoD) budget.

The Conservative-Liberal Democrat coalition government said it inherited a raft of unfunded spending commitments when it took over from Labor in May 2010.

"In the next few days we will be in a position to make the grand announcement that I've balanced the books," Hammond told the weekly broadsheet.

"In terms of reducing the size of the civil service, the army and the air force, we shouldn't have to do any more over and above what we've already announced."

Britain confirmed on Thursday that it has reversed its choice of fighter jets for future aircraft carriers, ditching the preferred conventional take-off version of the U.S.-built F-35 for a jump-jet model.

The latest turnaround dealt a blow to a defense deal between Britain and France as it means that planned Royal Navy aircraft carriers will no longer be equipped to handle French aircraft.

The move risked being seen as yet another gaffe for the coalition, which has made a series of recent policy U-turns and faces growing pressure over its dogged adherence to austerity over growth.

Hammond termed the decision the "last big piece in the jigsaw" and future projects would not now be delayed or scrapped due to a lack of funds.

"For the first time in the defense budget we've got a reserve in each year, which means that if something comes up we'll be able to manage it," he said.

Britain is currently without a carrier strike capability following a strategic review unveiled by the coalition in 2010 as part of wide-ranging austerity measures aimed at cutting a record deficit.

"For a decade now the MoD has had a program of spending that far exceeds the money available. It does it on a sort of institutionalized basis. Nobody here, until quite recently, has blinked," Hammond said.