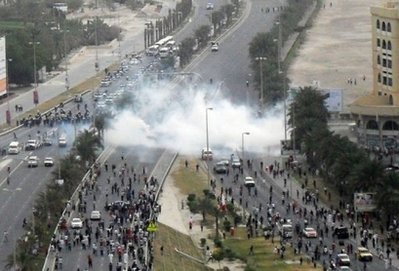 Bahraini police on Sunday clashed with demonstrators trying to occupy Manama's banking center, as protests spread to the heart of the strategic Gulf state's business district.

Witnesses said police fired tear gas and rubber bullets at around 350 activists who had sealed off the Financial Harbor business complex with road blocks and a human chain.

Hospital sources said around 200 people had been hurt in the violence, mainly from inhaling tear gas. They said three of those being treated were in critical condition, including one with severe head injuries.

The United States condemned the violence. "We urge the government of Bahrain to pursue a peaceful and meaningful dialogue with the opposition rather than resorting to the use of force," said White House spokesman Jay Carney.

Thousands of protesters, however, returned to the area later the same day, residents said.

A video uploaded on Sunday to YouTube purports to show Bahraini riot police shooting an unarmed protester in the head at point-blank range with a tear gas round.

The man appears to be remonstrating with helmeted riot police when they shoot him twice from just meters away -- once in the body and, when he tries to get up, a second time in the face.

The user who posted the 33-second "face-to-face shooting" clip claims it was filmed during Sunday's unrest in Manama, but the authenticity of the video could not immediately be verified.

Meanwhile, regime loyalists armed with knives and clubs fought students at the university. "The regime is using thugs," said Khalil Marzooq, a member of the main Shiite opposition group.

Bahrain -- home of the U.S. Fifth Fleet -- has become a regional financial hub as it seeks to diversify its economy away from a dependence on diminishing oil revenues.

King Hamad reiterated an offer of dialogue with the main opposition groups, which have refused to negotiate until the government resigns and dissidents are released from jail.

"I call all parties to meet quickly around the table and be open-minded and well-intentioned to reach a national consensus," he said in a statement quoted by the BNA state news agency, after a meeting with Jordan's foreign minister.

"I'm hopeful that they will join the dialogue without preconditions. We have given them the best deal they can hope for," he told reporters on Saturday.

Protests in Shiite-majority Bahrain, which has been ruled by a Sunni dynasty for more than 200 years, erupted after popular uprisings in Egypt and Tunisia ousted those countries' long-time autocratic rulers.

The main opposition groups have stopped short of demanding the toppling of the king, but more extreme hardliners have been vocal in calling for the end of monarchy.

Gates said he told Bahrain's leaders -- who have promised to create jobs and provide more cheap housing in response to the protests -- to quickly adopt far-reaching reforms or risk being swamped by the tide of democratic change sweeping the Arab world.

"I told both the king and the crown prince that across the region I did not believe there could be a return to the status quo ante," he told reporters after the talks.

Meanwhile, Bahrain's main trade union announced an open-ended strike from Sunday in protest at the use of force against demonstrators.

"This is in violation of human rights and international conventions ratified by the kingdom of Bahrain," said the General Federation of Workers Trade Unions.

Lebanon's Iranian-backed Shiite movement Hizbullah on Sunday condemned "the excessive use of violence to suppress peaceful demonstrations by the people of Bahrain who are seeking to secure their legitimate political rights."