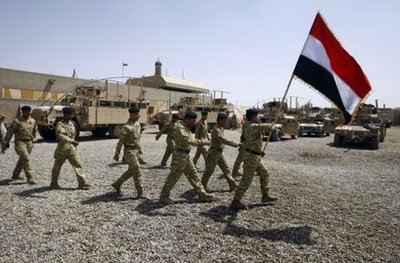 A suicide attacker rammed a truck packed with explosives into an army barracks in Iraq's restive Diyala province Monday, killing at least 11 troops and wounding 14, a security official said.

The attack took place at around 6:00 am (0300 GMT) at an army base at Kanaan, some 70 kilometers northeast of Baghdad, the official said.

"At least 11 soldiers died and 14 others were wounded," he said, adding that the building was totally destroyed and that it was feared more victims could be buried under the rubble.

The bomber drove the truck straight through the checkpoint at the entrance to the base and rammed the main building housing the sleeping quarters of the troops.

An Agence France Presse correspondent who arrived on the scene saw a host of ambulances around the barracks and excavators clearing away the rubble. He said the blast had created a crater three meters deep and four meters in diameter.

Authorities also defused a car bomb and two improvised explosives near the blast site, which the official said were intended to go off after the arrival of rescue workers and police, and in order to drive up the toll.

"There was a fault in the security procedure. If the security people had done their job, the vehicle would not have been able to reach the base," said Iman Karkhi, a member of Diyala's provincial council.

"I call on the government to compensate the people for their material losses," she said, adding that at least 150 homes in the vicinity had been damaged.

The provincial council building, which adjoins the base, was also damaged and at least five civilian vehicles were charred by the blast.

In other incidents Monday, at least eight people were injured when three improvised bombs exploded in Baghdad, an interior minister official said.

One bomb aimed at a police patrol in the eastern district of al-Amin wounded three policemen and two civilians.

Kanaan is situated some 10 kilometers east of Baquba, the chief town of Diyala province, a former al-Qaida stronghold which remains one of the most violent in Iraq because of strong ethnic and religious differences.

The province is part of a long strip of land that extends from Syria to Iran, and dotted with disputed territories claimed both by the central government and the autonomous Kurdistan region in northern Iraq.

A January 20 bomb attack in Kanaan against a group of pilgrims en route to mourning ceremonies in the southern city of Karbala, killed one pilgrim and wounded three.

Violence has significantly declined since its peak in 2006-2007, but deadly attacks remain a part of daily life.

A total of 197 Iraqis were killed in nationwide violence in February.