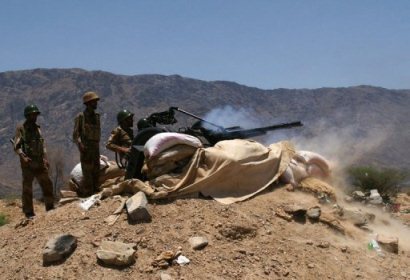 An all-out army offensive against Al-Qaida in south Yemen raged into a fifth straight day on Wednesday with battles around the restive town of Loder leaving another 13 people dead, most of them jihadists, sources said.

Wednesday's fighting saw the army backed by local militiamen taking on Al-Qaida insurgents in an area surrounding Mount Yasuf, overlooking Loder in Abyan province, which until it was overrun on Tuesday had been an Al-Qaida stronghold, witnesses said.

A member of the Popular Resistance Committees, a militia formed by local residents, told AFP that Al-Qaida militants had at dawn fired artillery shells at troops and militiamen stationed atop Mount Yasuf, killing two armed residents and wounding four.

The army responded and in a fierce counter-attack killed 11 jihadists, tribal sources said. The area then fell quiet, they added.

The Defense Ministry's news website 26sep.net reported that the jihadists had suffered major defeats around Loder on Tuesday.

The army and militiamen, it said, "dealt heavy blows to the terrorists in Loder and managed to cleanse many positions they were stationed in, including Mount Yasuf... which was completely cleansed after all their strongholds were destroyed."

The jihadists, who last year took control of the Abyan capital Zinjibar and a string of other southern towns and cities, have been trying to overrun Loder for months but have been repulsed by the militia, backed by the army.

Residents of Zinjibar and the adjacent Al-Qaida stronghold of Jaar said that the situation was relatively quiet in both towns later on Wednesday.

Troops on Saturday launched a multi-pronged assault aimed at recapturing Qaida-held towns and cities across Abyan, including Zinjibar.

Since then at least 128 people -- 82 jihadists, 20 soldiers, 16 civilians, and 10 militiamen -- have been killed, according to an AFP tally based on reports by officials and tribal leaders.

The offensive is supported by U.S. drones which on Saturday launched two air strikes in eastern Yemen killing a total of 11 suspected Al-Qaida jihadists.

On May 6, air strikes by U.S. drones in eastern Yemen killed jihadist network leader Fahd al-Quso, wanted by Washington in connection with the 2000 bombing of the USS Cole.

Quso's name figured on an FBI list of most wanted terrorists, along with a reward of up to $5 million for information leading to his arrest.