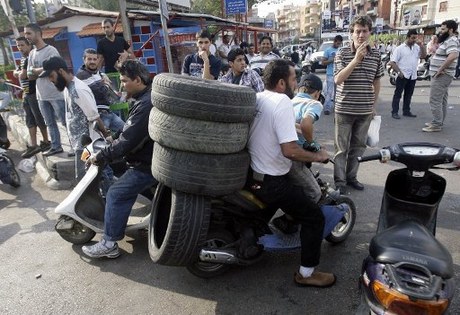 An agreement was reached on Wednesday between Interior Minister Marwan Charbel, Islamic committees and the committee following up on the case of Islamist detainees, under which Salafist activist Shadi al-Mawlawi will be re-interrogated on Thursday under the supervision of Judge Saqr Saqr and in the presence of Mawlawi’s lawyers.

Charbel later arrived at the square and met with the protesters.

State-run National News Agency said Mawlawi’s case faces three possibilities: “He might be freed if proven innocent, released on bail if he is involved in offences, or kept in custody over substantial charges that do not allow his release on bail.”

Treating people fairly and with dignity solves a lot of problems and conflicts.

So basically, if a alleged bank robber is caught red-handed and/or is arrested, we would need the permission of his parents and loved ones to proceed with an investigation or a hearing.
Keep up the good work guys!

No but he should have a lawyer present no matter what

Can we do the same interrogation of the 4 Hizbollah accused of killing Harriri and execute the warrant? or we need a permission from his highest majesty nasrallah before we enter their houses to arrest them?

No Cedar you cannot loool they are a red line protecting us from Isreal and other nations! loooool