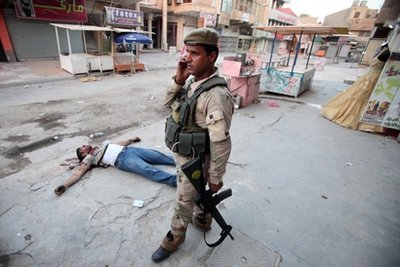 An Iraqi anti-terror officer, his wife and three children have been shot dead by gunmen in north Baghdad, security and medical officials said on Saturday.

The family was murdered on Friday evening, the officials said, taking to 10 the overall death toll from violence in the Iraqi capital a day ago, and 15 in the past two days, a notable increase from what had been a relative calm.

A medical official confirmed the deaths, and added that all three children were less than 10 years old. Both officials spoke on condition of anonymity.

The killings came on the day when three near-simultaneous bomb blasts at a pet market in east Baghdad killed five people, and a day after a bomb attack at a restaurant in the capital's southeast left five others dead.

Violence has diminished in Iraq since its heights in 2006 and 2007, but there are still regular attacks in the country.

In April, 126 Iraqis died in attacks nationwide, compared with 112 in March, the lowest figure since the 2003 U.S.-led invasion that ousted Saddam Hussein.