Russia Refuses to Budge on Syria at G8 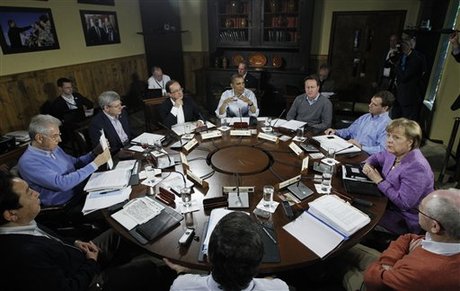 "There cannot be any change of regime through force," the Kremlin's Africa envoy, Mikhail Margelov said, adding that G8 leaders meeting at Camp David had yet to agree on the Syria part of their final summit declaration.

"One has to give an opportunity to the Syrians to sort out their affairs themselves," Margelov told reporters in Washington.

"You cannot use an ax to shear your way through the Syrian crisis; you have to use a pair of pincers to somehow sort it out."

Despite refusing to budge from their principle of non-intervention on Sayria -- a thorn in the side of Western efforts to stop Assad's year-long crackdown on dissent -- the Russian envoy was critical of the regime, saying it had not come up with "any really creative ideas" to resolve the crisis.

"It is clear that the latest elections did not put an end to the Syria political crisis," Margelov said, referring to May 7 legislative polls. "In my opinion, reaching that end will take a long time."

More than 12,000 people, the majority of them civilians, have died since the Syrian uprising against Assad began in March 2011, including more than 900 killed since the putative truce came into effect, rights activists say.

Western powers have repeatedly called on Assad to step down but Margelov expressed wariness about what could follow.

"The anti-Bashar, anti-Assad opposition does not represent a single entity," he said. "If the current leadership leaves, who will come to take over?"

The Kremlin, which cautions against intervention in domestic affairs of conflict-ridden countries like Syria and Libya, is at odds with the rest of the G8, which also includes Britain, Canada, France, Germany, Italy, Japan, and the United States.