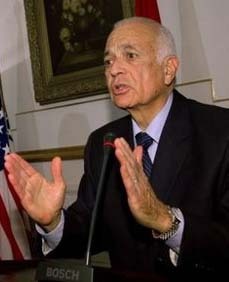 Egyptian Foreign Minister Nabil al-Arabi is “closely following the developments in Lebanon” and would exert all efforts to support the resumption of dialogue among all Lebanese parties, his spokesman Minha Bakhoum said.

Al-Arabi is concerned over the “decline in the possibilities of (holding) dialogue among the parties,” Bakhoum said in a statement on Wednesday.

The huge gap between the March 8 and 14 forces endangers the country’s stability, she said.

Al-Arabi has confirmed that “Egypt would exert all efforts to support the resumption of open political dialogue among all Lebanese parties and on all controversial issues,” Bakhoum said.

“Cairo would support any serious effort aimed at bringing back national consensus to preserve the stability of Lebanon and the Arab world,” she added.