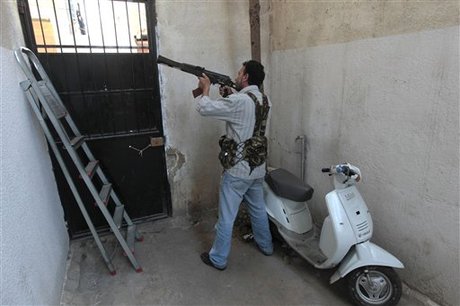 Exchange of gunfire renewed on Tuesday between the rival Tripoli districts of Bab al-Tabbaneh and Jabal Mohsen, as the army threatened an “unprecedented response” against anyone who violates the fragile ceasefire.

Army troops fired back at the sources of gunfire, as state-run National News Agency said no gunmen were visible on Bab al-Tabbaneh’s streets.

Al-Jadeed quoted Jabal Mohsen sources as saying that “orders have been given not to fire back at Bab al-Tabbaneh shooters.”

The TV network also reported clashes between “the al-Amerkan neighborhood and Jabal Mohsen.”

It quoted army sources as saying that “should the situation remain like this, there will be an unprecedented response (from the army) never witnessed before by the two parties.”

Always warning and never acting. I dont care whether it is Bab el tabbaneh or Jabal mohsen that started, clean up those neighboorhoods already and let us rest. This army is worth nothing because it has no decision of its own. It awaits a "political decision" while in other countries, the ISF would have stormed the place to restore order without having to ask every god damned street leader thug the permission to enter. Either the General army command show balls or someday soon all this will erupt into a bigger inflicting conflict.

If you can't confiscate arms try confiscating scooters. It seems all the za3ran use scooters these days to do their dirty work.

dont bother bachar doesnt give a damm about petitions

The response has been precedented many times already! Who is kidding whom? Mafia Hariri thugs are on the loose and they are the ones who are responding to the army in unprecedented ways.

FT the petition is set by Bashar through his Harry Potter enterprises...once signed the killings will stop and the sea shall give up its dead. Aslo Michael Jackson will return to life too. I cannot beleive how many people sign these silly pettitions out there but then again lots of people people bought the Sea Monkeys hoping the exist.

@ Flamethrower and anonymetexasusa, i'm sorry to say to you guys that yes you are right that the army needs a political decision everywhere else, you are right in this matter, but the political decision elsewhere is different than in Lebanon. It is obvisous elsewhere, that the political decisions wouldnt have taken days and days, they would have acted directly. In lebanon, the army command must talk to street leaders, ask them to withdraw, is this serious? since when the national army of any country negotiates with terrorists killing and bombing a city? there is no middleground in this, they should be exterminated ( the gunmen not the civilians ), the army should enter each home and check for weapons and confiscate it. It is non negociable and it is not about dictatorship but about common sense... where in the world do you need such a long political decision on something which the solution is obvious?

What i wrote in my first comment about the army not needing a political decision was too far, what i really meant is that it should have gotten a direct and speedy political response to what it knows already that should be done. Which is clean up the neighboorhoods from the filth and confiscte weapons. In lebanon we have to wait for leaders of street thugs to agree to withdraw. They shouldnt withdraw only they should be in prison by now. I mean what the hell is this jungle?? leaders of salafists and alawites in tripoli inciting strife should be emprisonned ! where in the world do you see thugs above the law and not emprisonned? yes mafias maybe but mafias dont throw bombs and gun down people on the streets , they do their thing discretely and keep the neighboorhoods quiet. It is a disgrace of a country we have.

My guess the governement didnt send the ISF for one simple reason. The alawites know it is affiliated more to March14th or Hariri, which would have caused a bigger mess even. I dont agree with their logics because ISF should be the first to restore order internally. The governement is responsible as well as march 8th and march 14th.