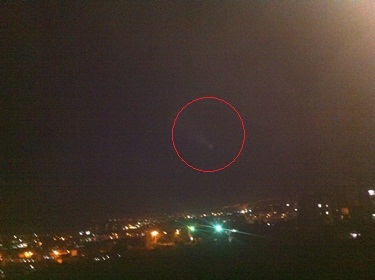 Unidentified glowing objects, apparently meteors, appeared in the sky above several areas in Lebanon on Thursday, sparking astonishment among residents.

OTV reported that glowing objects were also sighted above the Lebanese-Israeli border and the Turkish-Syrian border.

Quoting astronomical sources, LBCI television said “according to the scientific explanation, the phenomenon of the glowing objects resulted from large meteorites.”

OTV described the phenomenon as a meteoric downpour.

It's a sign our politicians should put their petty private interests and Go to the Circle Table of Discussion requested by the President of the Republic, and leave us, the people live our lives in freedom and peace.

We'll prosper on our own. Just let us be.

Imagine a biiiiig meteor falling on the place during the meeting our politicians are planning.

I would start visiting the mosque and the church everyday!

@kamal1 If you reread the article you can see that it appeared over other countries!

A star with a luminous tail will rise from the east before his emergence(Imam Mahdi).

la la la ou la. Ento mannkon fehmin shi. What you are seeing is an experiment by this very bright lady:

According to elder people, it means "c'est un mauvais presage"... let's hope it isn't the announcement of an upcoming war.

it is seen all over iran. http://www.facebook.com/l.php?u=http%3A%2F%2Fwww.youtube.com%2Fwatch%3Fv%3DJXpbDqJN240%26feature%3Dcolike&h=mAQE8xy8BAQE6QP7naTK815iJqZW0SKggKAoUz71VdPVi-w

It's probably Mehdi comming down to save the wothless 11

well if you believe in the aliens conspiracy theory, there may be ships checking out their old space landing station in Baalbeck

I am surprised we did not try to shoot at them.

We have 60,000 rockets that can reach them. The only thing is for those objects not drop a nuclear object on us.

Those 60,000 rockets hit the target intended 1 out of 25 times! "causing minimul material damage"

we saw that in iran and russia and azarbayjan sky.

We saw it too. It was very obviously a green signal rocket.

"Quoting astronomical sources"... Are you kidding?
I am sure these sources are extremely reliable in Lebanon. What astronomical sources?
It also can be a "dead" satellite falling back to Earth, or as the Israeli newspaper said, it may be a russian test missile

really? and is it going around the world first?

What a silly guy you are!

Correction: It was also seen in Palestine.

Asaf, stop trying to insert filthy "israel" in to everything. Get lost and dont post on our websites. Your not welcome. Go to your haaretz and the like and post there instead while you still can as all your zionist publications will be shut down together with your artifical state built on palestine and parts of syria. Better enjoy it while you still can.

we saw it in Cyprus whatever it was!!! Falling to earth then suddenly spinning and breaking up. We awaited little green men but none have arrived yet.