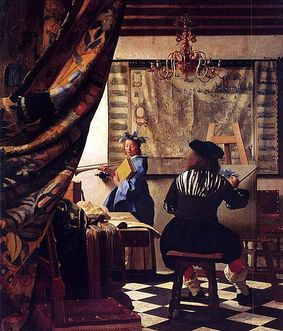 "The Art of Painting", one of the most famous works by 17th-century Flemish artist Johannes Vermeer, should remain in Austria, the country's restitution commission recommended on Friday.

The previous owner, Jaromir Czernin, had not been compelled to sell when the painting was bought in 1940 by Adolf Hitler himself for 1.65 million Reichsmark, the commission said in a unanimous decision Friday.

It found "that Adolf Hitler did not actively seek to purchase the painting, but rather that the sale was actively pursued by Jaromir Czernin's lawyers".

Czernin's heirs have called for the painting's restitution, claiming their ancestor was forced to sell it for a lower price.

However the commission, whose recommendations are always followed by the culture ministry in restitution cases, noted: "the idea that Jaromic Czernin was a victim of political persecution cannot be proven".

While Czernin's heirs have pointed to his wife's Jewish ancestry, the commission said Czernin had also sought to join the Nazi party in 1940 and had claimed membership in various related organizations.

"This trivializes what the Nazis did," Randol Schoenberg, Czernin's descendants' attorney said on Friday, threatening to take the matter to arbitration and accusing the commission of "defending Adolf Hitler".

Seeking to join the Nazi party had been a survival technique and the painting's final selling price, at a third of the requested price, could hardly be deemed appropriate, Schoenberg told the Austria Press Agency.

He argued the commission had completely ignored conditions under the Nazi regime, insisting that "anyone who comes to the conclusion that (Czernin's quarter-Jewish wife) was not persecuted, is an idiot".

"The Art of Painting", one of the most treasured artworks at Vienna's Kunsthistorisches Museum (KHM), is seen by many as Vermeer's greatest work.

KHM director Sabine Haag greeted the news on Friday with relief, noting the artwork "is certainly one of the museum's most valuable paintings".

Austria has had a series of high-profile restitution cases in recent years, the most famous being the 1907 portrait of Adele Bloch-Bauer by Gustav Klimt, which the Austrian state was forced to return to the heirs of its previous owner in 2006, after a lengthy legal battle.