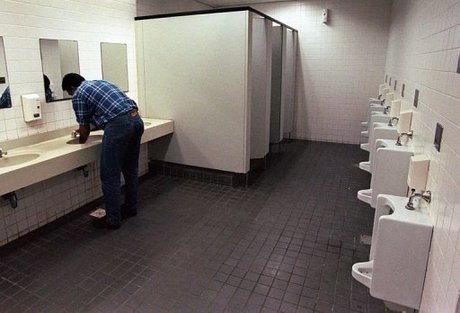 A local Swedish politician wants to require all men to sit down whenever they use the toilets in a county council building, to keep them clean and promote good health, a counselor said Thursday.

Viggo Hansen, a member of the Left Party, submitted the proposal to the Soermland County Council in central Sweden earlier this week.

In Sweden, where daycare centers encourage little boys to "be a sweetie and take a seatie", the issue is not being taken lightly.

In an interview with a local television channel, Hansen pointed out that according to some experts sitting down to urinate is not only more hygienic but also reduces the risk of prostate trouble.

His proposal also claims that relieving oneself while seated "contributes to a better and longer sex life."

Critics suggest it may be difficult to enforce the rule, which the council has one year to study before reaching a decision, according to the head of the Left Party group, Maud Ekman.

What will they do with all the urinals ??? Replace them ??? Maybe. What a way to spend Tax Dollars....

The prinicple is: If women are condemned by Nature to pee sitting/squatting down, for the sake of equality men must give up their natural advantage. Next step is that when a woman is giving birth,the father must lie on a bed next to her while either someone beats him on the stomach, or be given chemicals that cause intense abdominal cramps. That way he will suffer like the mother suring the child's delivery.

Are women going to be required to squirt when having an orgasm? If not, why not?