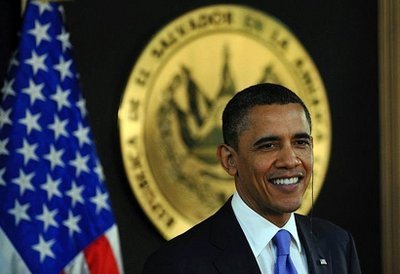 U.S. President Barack Obama said Saturday the international mission in Libya was clear and focused and succeeding and had saved countless innocents from a "bloodbath" threatened by Moammar Gadhafi.

Under increasing pressure to explain his strategy to Americans, Obama gave his most detailed review of the conflict so far, and insisted American national interests were behind his decision to order U.S. forces into U.N.-mandated combat.

"Make no mistake, because we acted quickly, a humanitarian catastrophe has been avoided and the lives of countless civilians -- innocent men, women and children -- have been saved," Obama said in his radio and online address.

The president said a week into the operation that when innocent people were brutalized, by a leader like Gadhafi threatening a "bloodbath" and when nations were prepared to respond together "it's in our national interest to act."

"And it's our responsibility. This is one of those times," Obama said.

"Every American can be proud of the lives we've saved in Libya," he said.

The president has faced criticism that the mission to set up a no-fly zone is ill-conceived and has no clear end date or exit strategy, but he previewed arguments he is likely to muster in a national televised address on Monday.

"Our military mission in Libya is clear and focused," Obama said, noting the no-fly zone was mandated by the U.N. Security Council and that an international coalition was protecting Libyans to prevent "further atrocities."

"We're succeeding in our mission. We've taken out Libya's air defenses. Gadhafi's forces are no longer advancing across Libya.

"In places like Benghazi, a city of some 700,000 that Gadhafi threatened to show 'no mercy' his forces have been pushed back," Obama said.

Obama made clear to Americans wary of yet another foreign military adventure however that the goals of the mission were limited and that "responsibility for this operation" would be transferred to U.S. allies and NATO partners.

"The United States should not, and cannot, intervene every time there's a crisis somewhere in the world," Obama said, repeating his vow that no U.S. ground troops would be deployed in Libya.

But he also laid out his vision of a multilateral foreign policy, where the United States pursues goals in concert with global partners, mentioning that regional states Qatar and the United Arab Emirates had joined the Libya operation.

"This is how the international community should work -- more nations, not just the United States, bearing the responsibility and cost of upholding peace and security," Obama said.

The president also repeated his warnings that Gadhafi, who has ruled Libya with an iron fist for four decades but became the latest autocrat to face challenges to his rule this year, should go.

"Our message is clear and unwavering. Gadhafi's attacks against civilians must stop. His forces must pull back.

"Humanitarian assistance must be allowed to reach those in need. Those responsible for violence must be held accountable.

"Moammar Gadhafi has lost the confidence of his people and the legitimacy to rule, and the aspirations of the Libyan people must be realized."