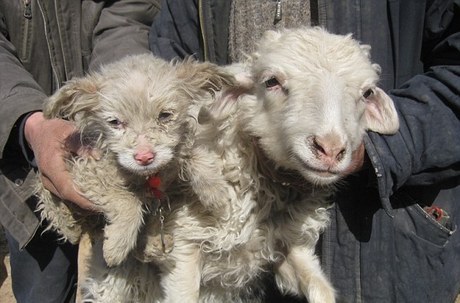 A Chinese farmer is insisting that a sheep gave birth to a puppy that has wool like a lamb's, but mouth, nose, eyes, paws and tail like a dog's.

"I was herding the sheep, and saw a sheep licking her newborn lamb on the grassland. The lamb was still wet," the Daily Mail quoted farmer Liu Naiying as saying.

"When I went up close to check on the lamb I was shocked because it looked so weird, like a cross between a sheep and a dog,” he said in one of his fields in the central Shaanxi Province.

"I was a bit frightened, as I've been raising sheep for 20 years and had never seen such a creature," he said.